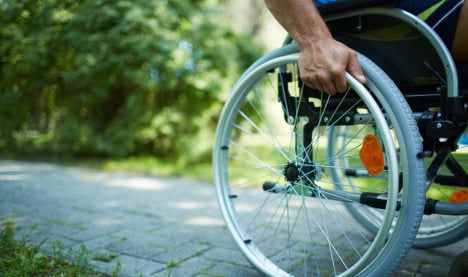 The man allegedly pretended to be a paraplegic. Photo: Wheelchair photo: Shutterstock

The anaesthetist, originally from Iran, allegedly faked an accident at the hospital where he worked in 2012 by falling down the stairs, Il Messaggero reported.

He claimed the accident caused injury to his legs, as well as vision loss in his right eye and a severe pain in his spine that forced him into a wheelchair, winning him €1.2 million in compensation and a €5,000 a month lifetime pension.

La Repubblica reported that €450,000 of the payout had already been received. The man also staged an attempted suicide, the newspaper said.

But suspicions were aroused after police discovered that the alleged symptoms did not comply with medical tests and the man led "a normal life".

"He went to the bar with friends, carried significant weights, renovated his house, pushed a supermarket trolley and loaded cement into his car, which he drove regularly," the newspaper said.

The man can be seen in the police video below walking and driving his car.