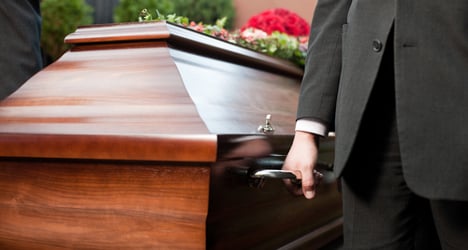 The man's family paid €2,300 for the funeral. Coffin photo: Shutterstock

Family and friends were attending the funeral of Maurizio Sebastianelli when the coffin broke, Il Messaggero reported on Sunday.

“It snapped, they’d just lifted it up to take it away and there was a thud. We had to take him in the church with a cover to hide the massacre,” his daughter Debora Sebastianelli, 23, was quoted as saying.

“I was already under shock over his sudden death, then this upset me. I went out into the street screaming, I ended up in the emergency room with very high blood pressure,” she added.

Debora Sebastianelli said she intended to sue the Ama funeral service over the accident if she was not paid compensation.

“I explained that a reinforced coffin was needed because my father was very heavy, 130 kilos and one metre 80 centimetres tall,” she said of arranging the funeral, which cost €2,300 in total.

“I saw my father die twice,” she said.

The Sebastianelli family’s story follows the death of an elderly man at a cemetery in northern Italy. The pensioner was visiting his wife’s grave in Treviso when he slipped and fell on the marble grave, hitting his head and dying instantly.

Last year six people in Spain were injured by a falling coffin at a funeral, while last month a gravedigger became trapped under a gravestone during a service.