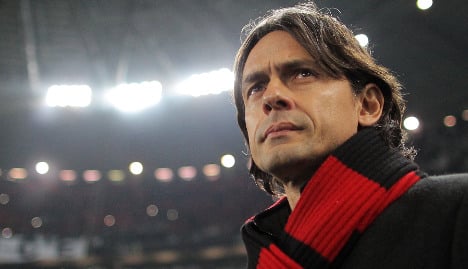 Nine-man Milan were whistled off the pitch at the San Siro after a 1-1 draw with struggling Empoli on Sunday further dented the Rossoneri's hopes of European football next season.

Club owner Silvio Berlusconi has consistently denied the club, or part of it, is up for sale. The latest denial came at the weekend.

Amid reports from Thailand that Bee Taechaubol, the executive director of Thai Prime Company Limited, a south-east Asian private equity group, wants to buy a 50 percent stake in the club, Berlusconi's holding company Fininvest quickly went on the defensive.

"Given that various parties have shown interest in a partnership with AC Milan, Fininvest categorically denies that talks, pre-agreements or decisive meetings will soon be on the agenda," said a statement issued on Saturday.

Taechaubol is also a co-owner of the Global Legends Series (GLS) Bangkok, which features veteran soccer players taking part in charity matches across the region.

If any deal were to go through, Taechaubol could become the second Asian owner of an Italian Serie A club less than two years after Indonesian tycoon.

Although both clubs are currently struggling to keep pace with the likes of Juventus, Roma and Napoli – who occupy the top three spots in the league – Milan are arguably in the most dire straits.

The club's failure to rebuild following a mass exodus, which included Zlatan Ibrahimovic and Thiago Silva, in the summer of 2012 has left the Rossoneri consistently struggling to finish in the top five.

After 23 games, Milan – who failed to qualify for Europe this season – sit in 11th place in Serie A, 24 points adrift of leaders and champions Juventus and 12 behind Napoli, who occupy the third and last Champions League qualifying spot.

Former club icon Inzaghi took over at the start of the season pledging to do his utmost to rebuild an already ailing Milan side.

But since the turn of the year, the guile that helped Inzaghi become one of the most feared strikers in European football has been conspicuously absent on the Milan touchline.

Milan have amassed 30 points in 23 league games under Inzaghi, his average points per game the worst of any coach since Berlusconi purchased the club in 1986.

The Rossoneri, the seven-time European champions who once struck fear into the hearts of Europe's footballing elite, are at risk of finishing among the league's also-rans.

And Inzaghi, who looked forlorn as his side held on for a share of the points on Sunday, admitted times are tough.

"Right now, we can't look at the league table. We need to pick up a good win and we also have to get back some of our injured players," he said.

"It was a complicated match. I haven't ever been able to field the same line-up for two matches in a row because I've always had players out injured or that aren't 100 percent.

"It's obvious that the fans want more. We feel this pressure and we have to win to ease the pressure.

"We have to improve and get back to being a true team, compact and above all win. This is what matters most."