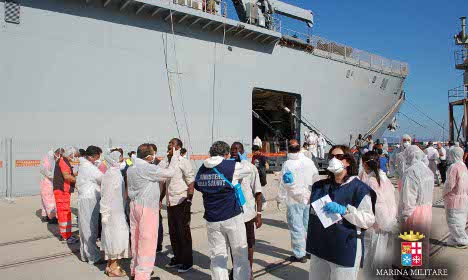 Mouhamud Elmi Muhidin, 34, was identified by several survivors of a boat wreck near the Italian island of Lampedusa in October 2013 in which 366 migrants died, the reports said.

He was involved in the wreck, but managed to find a boat to take him to safety on Lampedusa.

The court in Agrigente in Sicily, southern Italy, convicted Muhidin of human trafficking, sexual violence, and criminal association with a view to trafficking migrants illegally.

Several witnesses in the trial, including young girls, recognized him as one of the organizers of several boat crossings to Italy. They said he was part of a group of Somali fighters who had guided their group through the desert to Libya.

Criminal gangs take groups of migrants from several countries through desert zones to the Libyan coast. Armed men often hold the migrants prisoner there until weather conditions allow a crossing to Italy for which they often pay thousands of euros.

The perils of the crossings were illustrated again this week when around 330 African migrants died trying to cross from Libya.