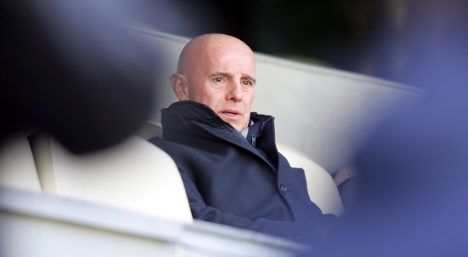 Comments by Sacchi, who helped Milan win back-to-back European Cups in 1989 and 1990, that "too many blacks" played in Italy's under-20 leagues and that Italy no longer had "dignity or pride" caused a furore on social media.

Former England international Gary Lineker and Mino Raiola, the agent of black Italian player Mario Balotelli, were among the first to hit out.

The Italian Football Federation (FIGC) has yet to make any statement but late on Tuesday the Italian government weighed into the row.

"The Italy of 30 years ago is not the Italy of today," said Graziano Delrio, the State Secretary to Prime Minister Matteo Renzi who also holds responsibility for sport in the Italian council of ministers.

"Today there are young players who are Italian citizens in fact and by right given that they were born and raised in Italy even if their parents had overseas roots.

"They are part of the young generations who go to our schools, who play on our football and sports fields.

"And the theme of skin colour is certainly not where we should start trying to revitalize our youth system."

Sacchi is now a pundit and critic whose outspoken views often centre on the crisis engulfing Italian football at domestic and international level.

Speaking at an awards ceremony on Monday, the 68-year-old said: "Italy now has no dignity or pride, because we have too many foreigners playing in the under-20 leagues: in our youth sectors there are too many blacks."

A former director of Italy's national team at under-21 level, Sacchi claimed he was not racist because he signed a player like Frank Rijkaard, a Dutchman of Surinamese origin, when he was coach at Milan.

But the 68-year-old insisted that 'too many coloured players' featured for Italian youth sides at the famous Viareggio youth tournament.

"I'm certainly not racist, as my coaching history demonstrates with Rijkaard," added Sacchi. "But look at the Viareggio tournament. I would say that there are too many coloured players, also in the under-20 teams in Italy."

Sacchi's comments come less than three months after FIGC president Carlo Tavecchio was barred from holding any position with FIFA for six months over an alleged racist comment he made in August.

The 71-year-old Tavecchio, then campaigning for his current position, caused an outcry when he made a comment about a fictitious African player he named 'Opti Poba' "eating bananas".

They have also done little to help eradicate widely-held views that racism remains rife in the country, and not only in the sporting domain.

Cecile Kyenge, an eye surgeon who was born in the Democratic Republic of the Congo but has Italian citizenship, was subject to repeated racial slurs after becoming Italy's minister for integration, a post she no longer holds.

Roberto Calderoli, a former minister under ex-prime minister Silvio Berlusconi, compared Kyenge's features to "those of orangutan, even if I'm not saying she is one".

Prior to Balotelli's move to Liverpool, the Italy striker was subject to racist taunts at several football grounds in Italy while at AC Milan.

Shortly before his arrival at the club, in January 2013 teammate Kevin Prince-Boateng led Milan off the pitch during a friendly against lower league side Pro Patria after he and other black players were subjected to repeated racist taunts.

Balotelli was born to Ghanaian parents but adopted by white Italians and his agent, Raiola, was quick to react.

He called Sacchi "ignorant" and, in ironic tones, said the comments had given a bad impression of Italians.

"Italian Football too many ignorant people in power so we're in the s… Ashamed to be Italian when I hear Sacchi's declaration. Bella figura (great impression)," said Raiola.

Lineker posted a Twitter comment on Tuesday which said: "There are too many racists in Italian football."

Raiola appeared to suggest crisis-hit Italian football is in its current state because of the racism issues which have plagued the sport, and the country, for decades.

He added: "In this world there are no foreigners, only people. Sport should be open to everybody, whoever plays best plays. Italian football in the sh… because of this."