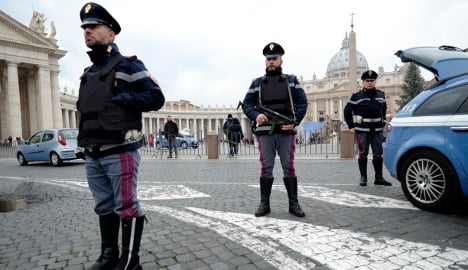 The head of the Vatican's Swiss Guard confirmed additional precautions had been taken to ensure the safety of Pope Francis. Police standing guard outside the Vatican: Andreas Solaro/AFP

A day after the Italian cabinet approved new security measures because of fears of a terrorist spillover from the chaos engulfing Libya, the head of the Vatican's Swiss Guard confirmed additional precautions had been taken to ensure the safety of Pope Francis.

"What happened in Paris with the Charlie Hebdo attacks could also happen at the Vatican. We are ready to intervene to ensure Francis is protected," Christoph Graf told Italian daily Il Giornale.

"We have asked all the Swiss guards to be more attentive and to carefully monitor the movement of people," he added, stressing that it was up to the intelligence services to provide detailed information on any potential threat.

Graf acknowledged that Francis's people-friendly style did not make his job easy.

"He does not like having security too close to him. We have to respect that and keep our distance," he said.

The Italian government's security committee on Tuesday placed the country on a heightened state of alert and rubber-stamped a decision taken last week to increase the number of soldiers on anti-terror "safe streets" duties from 3,000 to 4,800.

Italian media reported on Wednesday that the site of the upcoming Expo 2015 world fair in Milan, the foreign ministry in Rome, the Vatican and synagogues across the country had been identified as prime potential targets for Islamist militants.

"The risk of an attack by a lone wolf or an unbalanced person is concrete," said Felice Casson, a senator and secretary of the Copasir parliamentary committee that oversees Italy's secret services.

"The more successful attacks in other countries are, the greater the risk of someone trying to emulate them in Italy," he told La Reppublica.

The paper said special security had been ordered for some of Italy's leading journalists and for prominent Italian Jews. Restrictions on government ministers using official planes for private trips have been eased.

Italy has been swept by alarmist rumours in recent days since the posting of a video showing the Islamic State group's beheading of 21 Egyptian Christians in Libya, which is a former Italian colony.

The tape includes a warning that Libya could be used as a platform for attacks on Italy and that Isis fighters were "at the south of Rome."

Some opposition figures in Italy have called for all naval search-and-rescue operations in the Mediterranean to be suspended because of a much-touted risk of terrorists using refugee boats as a way of getting into Italy to stage so-called lone-wolf attacks.

The government admits it can't rule out that happening but says screening measures are in place to combat the risk, and that it has yet to find any evidence of Isis attempting this.

The government has also had to contend with a widely-circulated claim that up to 200,000 African migrants in Libya are about to embark or be ordered on to ships for Italy.

Matteo Salvini, the far-right leader of the anti-immigrant Northern League, has been the principal promoter of this claim, for which no reliable evidence has so far emerged.

Italian Foreign Minister Paolo Gentiloni said Wednesday that there was an "evident risk" of Islamic State loyalists teaming up with battle-hardened militia fighters in Libya and warned the world time was running out to stabilize the country.

Italy wants world powers to focus all their efforts on getting the warring parties in Libya to unite and squeeze out Isis.

If a ceasefire can be established, Rome says it is ready to lead a peacekeeping operation that would also be charged with de-arming a country awash with weapons and providing secure conditions for reconstruction of the conflict-scarred state.