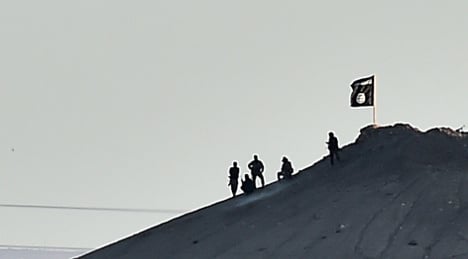 Alleged Isis militants stand next to an Isis flag atop a hill in the Syrian town of Ain al-Arab. Photo: Aris Messinis/AFP

The video, which showed the extremist group’s beheading of 21 Egyptian Christians in Libya, a former Italian colony, also claimed that Isis fighters were “at the south of Rome”.

“Isis is a threat that cannot be overlooked nor underestimated,” Sebastiano Sali, an academic in the Department of War Studies at King’s College in London, told The Local.

Italy, and Rome in particular, has been a target for the militants for some time.

Several threats against the capital, the centre of the Catholic Church, have been made by the group.

Last October, a photo of its flag was superimposed on the obelisk in St Peter’s square on the front cover of its propaganda magazine, ‘Dabiq’.

An audio message purporting to be from leader Abu Bakr al-Baghdadi, in which he says the group’s “advance on Rome” will not be stopped, followed a month later.

Two people were also detained in November after police found the Isis flag and a map of Rome in an apartment close to the capital.

“Ideologically, the Vatican and therefore the city of Rome are natural targets of any war dubbed as holy against Christianity,” Sali added.

But as Isis advances in Libya, just 175km from the Italy's southernmost island of Lampedusa, those threats are now being taken seriously by some.

Italy issued its strongest warning on Wednesday, when Foreign Minister Paolo Gentiloni said there was a serious danger of Isis fighters forging an alliance with local militias or criminal gangs engaged in a multi-sided battle for control of the north African country.

Later in the day, security was tightened at the Vatican and at other sensitive spots across Italy.

The tension has been exacerbated by fears that jihadists could smuggle themselves into Italy aboard boats carrying migrants from Libya to Lampedusa, where migrants arrive almost daily.

In an article entitled, “Europe, Isis and Rome” published on Sofrep, a military news website, a few weeks after the Charlie Hebdo attacks in Paris, Paolo Palumbo, an Italian military historian, wrote that Italy could be the next in the line of fire for al-Qaeda or Isis.

“We must be careful,” he warned.

“There are many people, even Italians, who fight for al-Baghdadi and would love nothing more than to raise the black flag of Isis over Vatican City.”

Since dictator Muammar Qaddafi was toppled and killed in a Nato-backed revolt in 2011, Libya has been plagued by conflict among rival forces battling for control of key cities and the country's oil riches.

But Sali said it’s a fight where “no quarter is given”, which leads him to believe that “the parties involved are not yet ready to export violence outside Libya on a large scale.”

In which case, he sees Libya as “a less likely source of terrorist attacks than other countries”.

He also noted that since the September 11th attacks in New York, Italy has been spared from, or at least well protected against, terrorist attacks.

“I believe this will continue mainly for one reason: Italy is the most important logistic immigration bridgehead to infiltrate the rest of Europe and no sane military strategist would compromise the easiest way to reach Madrid, Paris, Berlin, Brussels and even London,” he said.

“Though, that is of course a rational calculation in an irrationally-led environment.”

But one thing that could go against Italy is its government.

Prime Minister Matteo Renzi has led for just over year, and his young and untested cabinet members “lack the leadership and expertise to choose the best option,” Sali said, adding that Italy should have taken the lead a long time ago to spot and freeze the money and assets of terrorist groups.

“Weapons have a price and money must come from somewhere.”

He also said that military intervention, which was on Monday ruled out in the short-term by Italian Prime Minister Matteo Renzi, would be a “big disaster”.

“Libya and its sectarian divided population is such a quagmire that any army on the ground wouldn’t be able to identify friends and enemies or, even worse, would make friends that later end up becoming your own enemies.”