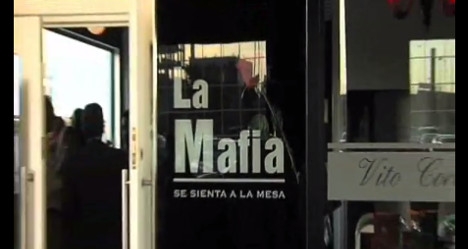 Following an appeal from Sicilian MP Claudio Fava, whose own father was killed by Cosa Nostra, the Sicilian mafia, the Italian government requested that the controversially named Spanish eatery either change its name or be forced to close.

However the request was not greeted favourably by Spanish authorities, who responded saying that the word “mafia” was now so widely used across the world that it did not necessarily relate to the Italian criminal organization.

They added that there were several brands containing the word “mafia” which were not only registered in Spain, but also in other EU countries.

Nevertheless, the foreign ministry’s undersecretary Benedetto della Vedova has assured Fava, who is an MP in Catania for the Left Ecology Freedom party, that the government would also contact the Spanish Embassy in Italy with its request.

“But it’s not even that original,” wrote the paper. “Considering that several Italian establishments are named after the so-called honorary company across the world.

“It’s the fault of a lack of imagination of those who run them, but also, disgracefully, of the great notoriety that the criminals from our South are earning abroad.”

A rare success story during the country's economic crisis, the Spanish franchise-model business last year grew to 34 restaurants nationwide since opening in 2000.

In an article printed in La Repubblica newspaper in February 2014, Attilio Bolzoni, a writer on organized crime, highlighted the irony of signing up for La Mafia’s loyalty club while members of various mafia clans carried out their activities in Spanish cities including Malaga, Madrid, Barcelona and Toledo.

"Imagine what would happen in Spain if someone in Italy opened a restaurant dedicated to the (Basque) terrorist group Eta," speculated the resigned-sounding journalist.

"The word mafia is a brand that is immediately recognized, it’s a call to attention and everyone remembers it,” the firm’s public relations manager Pablo Martínez told the Italian journalist at the time.

Martínez stressed that images of violence were prohibited in the firm's restaurants and that the model was the mafia of the movies like The Godfather.

"We apologize to those Italians who feel offended (by the name) but that’s not our intention."

The article caused an immediate reaction in Italy with Marco Anzaldi, an MP with Italy’s Democratic Party, calling for an official complaint to be lodged.

In August last year, a Sicilian politician and anti-mafia commissioner lambasted restaurants in Denmark for naming pizzas and sandwiches after a notorious crime gang after stumbling across an Al Capone pizza in Copenhagen.

He said the dishes "exploited the worst stereotypes about southern Italy and criminals".