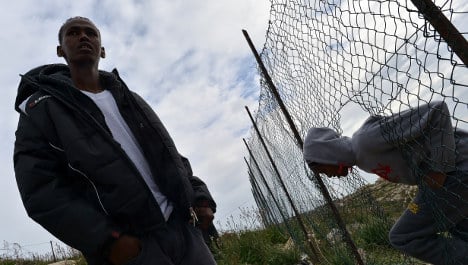 Migrants outside the "Temporary Permanence Centre" (CPT), a refugee camp on the Lampedusa island on February 19, 2015. Photo: Alberto Pizzoli/AFP

But the Eritrean boy kicking a dirty white football around with other asylum seekers on the tiny Italian island of Lampedusa is anything but miserable.

In fact, he rarely stops smiling and laughing.

Whatever horrors lie behind him, Tanjin's future – and perhaps that of the family he left behind in east Africa – looks brighter now he has made it to European soil.

Tanjin is one of nearly 2,000 people to have landed on Italy's southernmost outpost since the weekend after being rescued from people smuggling boats that never had much chance of making it across the Mediterranean.

A combination of his young age and the likelihood that he would soon face compulsory conscription if returned to Eritrea mean he has a good chance of being granted leave to remain in Europe and completing his education here.

His next port of call will be a reception centre on the Italian mainland that specialises in coping with minors who reach the country unaccompanied.

I want to be a doctor

Not all are as lucky as him. Several children are feared to be among more than 300 migrants thought to have drowned after being ordered at gunpoint to embark from Libya at the weekend on rubber dinghies with no hope of remaining afloat in what were unusually rough seas.

"I am saying that I'm in Italy now, it's good. They see, I am saying that I haven't died," he said, after talking to his mother and sister, whom he said he had left in a refugee camp in Kenya.

Thin, smiley and sporting a long black coat and dusty shoes, Abdenajib acknowledges how lucky he was to survive a day and a half at sea just days after 29 migrants had perished from exposure.

Speaking through the chain link fence at Lampedusa's migrant reception centre, the 15-year-old revealed his dream was to become a doctor.

"I want help, I want to learn and education. I want to go to Norway," he said.

From Kenya, Abdenajib travelled through Uganda and Sudan before finally reaching Tripoli, the Libyan capital, where he paid €1,000 ($1,100) to smugglers for the boat trip to Italy.

The sudden surge in arrivals has stretched Lampedusa's reception facilities to breaking point with the centre here having to accommodate up to three times the numbers it was designed for earlier this week.

By Thursday however, most of the adult asylum-seekers had been moved on to Sicily or mainland Italy, allowing aid workers to concentrate on sorting out the next steps for hundreds of minors.

More than 170,000 migrants from the Africa, the Middle East and South Asia landed in Italy last year and the trend since the start of January suggests that record could be surpassed in 2015.

"Unless the void of Italy's now defunct lifesaving Mare Nostrum search and rescue operation is filled, refugees and migrants will continue to die in great numbers at sea," Amnesty said.

Most of the migrants on Lampedusa were rescued by the Italian coastguard or by merchant ships.

"We were in the first boat and that's why we didn't have problems because Italians took us in when the waves started coming towards us," said Adam, from Mali.

"As for me, I need Italian citizenship. Here, we are all tired. Since I left the north of Mali until now, there have been issues."

In one scrape, his group was chased by militants and "we took off running, some of my friends were killed. It's a miracle that I'm here," Adam said.

Another migrant, Fred, felt lucky to be alive in light of the chaos in Libya.

"In Libya, people there are like vampires. They don't like black (people). When they see black outside, they'd like to shoot him," he said. "They are killing many people, that's why everybody's running to the sea."

Abdenajib and his travelling companion Mahmoud meanwhile were looking forward to their first real taste of European culture: by watching this week's Champions League matches through the windows of one of Lampedusa's bars.