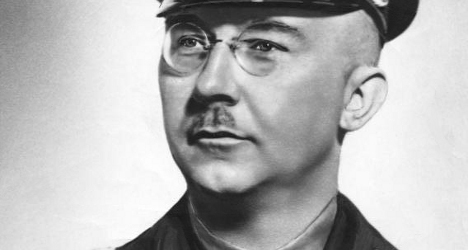 The promotional flyer recounting the history of Cosenza, a town in the southern Calabria region, was distributed at the Bit international travel fair in Milan earlier this month.

It recounted the life of Alaric I, a fifth-century king responsible for the 410 sack of Rome, and who is believed to have died in Cosenza.

Himmler was credited with sending archaeologists to the town in the 1930s, to search for the tomb of Alaric I owing to the king’s links to Germanic tribes.

But including the Nazi’s image in the brochure was met with criticism in Milan, prompting authorities in Calabria to order the image to be removed, Il Quotidiano del Sud reported.

Mayor Mario Occhiuto said the use of the “inappropriate” photo was an “unintentional mistake” by those behind the brochure.

“In any case, I have already taken on the responsibility of what happened and I have offered my apologies,” Occhiuto wrote on Facebook.

Himmler masterminded the “Final Solution”, which sought to kill all European Jews, and was the second most powerful Nazi behind leader Adolf Hitler.

Italian families of Nazi victims are still trying to seek justice for their relatives, with Italy ruling in October that they could seek compensation from Germany through the Italian courts.

The decision last year however goes against a 2012 ruling at the UN’s International Court of Justice, which stated that individuals could not take foreign countries to court.