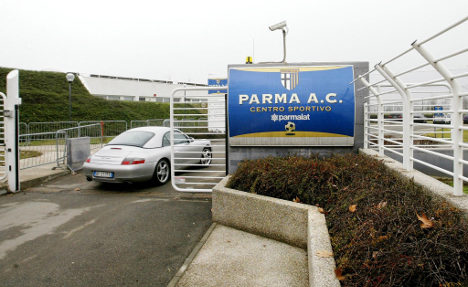 Parma football club is said to be €100 million in debt. Photo: Paolo Cocco/AFP

Club management, team captain Alessandro Lucarelli, the town's mayor Federico Pizzarotti and league and federation officials were in attendance at a tribunal in Parma to hear the news.

Lucarelli, who last week sounded the alarm over the state of the club's situation, said: "In the current situation the only thing I can see is for us to declare bankruptcy."

Parma, who are said to be €100 million ($113 million) in debt and owe up to €17 million ($19.2 million) in unpaid taxes, have already been docked a penalty point by Serie A official over their inability to pay players' salaries.

The squad has not been paid since last summer, but last week the true financial state of the club was laid bare.

Bailiffs arrived at the club to repossess equipment and on Sunday, Parma's league game with Udinese had to be called off because they did not have the money to open their stadium or pay the stadium stewards.

Serie A chiefs and officials from the Italian football federation (FIGC) have recently pledged to club together in a bid to help Parma finish the current campaign.

FIGC president Carlo Tavecchio said: "Parma will finish the championship thanks to the help of fellow clubs who will put their hands into their own club coffers."

Lucarelli last week hit out at league and federation officials for "allowing" Parma to get in such dire straits.

"Most of the fault lies with (former owner Tommaso) Ghirardi, but the league and the football federation (FIGC) should not have allowed this to happen. Now, all they're trying to do is salvage the league championship," he added.

Ghirardi sold Parma in December to an Albanian businessman although the deal lasted barely two months before it was sold on to Giampietro Manenti.

Manenti has been struggling to keep the club on its feet in recent weeks and the FIGC and Serie A league officials, according to reports, are in talks to loan the club five million euros so they can see out the remainder of the season.

Lucarelli added that Manenti "came to us with big promises, but so far we haven't seen a euro".

If Parma are declared bankrupt, all the previous results from games involving the team this season will stand and the teams who were due to meet Parma in upcoming games will be awarded 3-0 victories.

Whether Parma are allowed to continue this season or not, it is a spectacular fall from grace for the little provincial club who famously punched above their weight to win two Uefa Cups in their heyday of the 1990s, when they also finished runners-up in Serie A (1997).

Since being sold by previous owner Ghirardi in December, Parma have had two new owners, neither of whom have provided the necessary funds or bank guarantees to drag the club out of the mire.