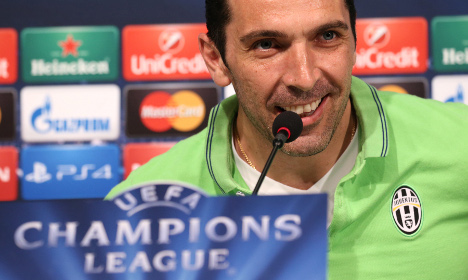 "I want to see each and every one of us give his best until the very end," Gianluigi Buffon said. Photo: Marco Bertorello/AFP

The Turin giants welcome Jurgen Klopp's side on a high, having boosted their Serie A lead over challengers Roma to nine points at the weekend.

Buffon, who admitted to getting frustrated with himself and the team during difficult encounters in recent weeks, said he has every respect for the Germans. Dortmund beat Juventus 3-1 to win the 1997 European Cup and were beaten in the 2013 final by Bundesliga rivals Bayern Munich.

Although Klopp's men are only now fighting their way back in the German league following a mediocre start to the campaign, they topped their group, conceding conceded only one defeat and scoring 14.

Buffon said it would be a mistake to evaluate Dortmund on their league form alone and believes Juve will have to be at their very best in Turin on Tuesday if they are to fulfil their objective of qualifying for their first quarter-final in two years.

"We know we're up against a side that never gives up, which has been in a recent final and that won its group," Buffon told reporters at Juventus Stadium on Monday. "Apart from their domestic form, when there's an objective on the line they give their very best."

Buffon was particularly outspoken after Juventus were held to a 2-2 draw a fortnight ago in Cesena, and on Sunday the Bianconeri were frustrated at home by a rugged Atalanta before prevailing 2-1 thanks to an Andrea Pirlo free kick on the stroke of half time.

Buffon said there will be no room for such sloppy play on Tuesday: "I want to see each and every one of us give his best until the very end.

"Whether we win or lose, we shouldn't have any regrets. In this game we simply have to give it everything."

Juventus, two-time kings of Europe, last appeared in the last eight of Europe's premier club competition two years ago when they were outclassed by eventual winners Bayern Munich.

Coach Massimiliano Allegri has ditched the 3-5-2 formation used by his predecessor Antonio Conte for a 4-3-1-2 which gets the most out of a star-packed midfield led by Pirlo and Paul Pogba, who has been in sparkling form so far this campaign.

Allegri played down suggestions his side faced their "match of the season" against Dortmund. He believes his current squad has what it takes to reach the last eight of the competition.

"It's absolutely not our match of the season, because we've got so many important games to play. It's not a final, it's a last 16 encounter over 90 minutes against a team that, like us, is in fine form.

"They're a good side with strong players who play fast, attacking football. Our objective while we're at home is not to concede any goals, even though they score a lot.

"We have to be wary of that, but we also have to make the most of this first leg in Turin if we are to give ourselves a good chance of qualifying for the next phase in two weeks' time."