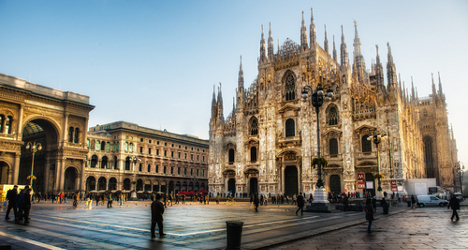 After Gothic trends dominated catwalk shows in New York and London, all eyes now turn to Italy to see if the likes of Prada, Gucci and Armani embrace the vampiric garlic-and-stake look for next winter's must-haves.

Fashionistas, models, buyers and their chauffeurs are descending on the northern Italian city for a fast-paced week of catwalk shows, stellar swag bags and champagne-fuelled parties in the streets around the Gothic cathedral.

The New York and London Fall-Winter 2015 shows left Brooklyn hipsters and Shoreditch hepcats rushing to get their hands on black frocks, studded coats and some serious eyeliner.

Trend-spotters will be looking to see if the cities' penchant for brocade, fur and shearling will be given a stiletto twist by Italy's masters of chic – while renegade unisex normcores will ignore all of the above and stick to strictly casual with comfy shoes.

Whether black turns out to be the new black or not, Milan is decidedly in the pink after a long economic downturn which hit the luxury industry hard.

"The fashion economy is back on track. It's going to be an excellent fashion week shaped by the sort of economic situation we've not seen for years," said Mario Boselli, head of the Italian Fashion Chamber.

After a 3.7 percent rise in turnover in 2014, the chamber has forecast just a 1.6 percent increase for 2015. But "favourable economic circumstances mean that figure is destined to grow," said the fashion force who is stepping down in April after 15 years in which he has boosted ties with emerging markets and Chinese talent in particular.

A longstanding row over timetables has been resolved – at least for this season – so that Gucci and Armani will bookend the shows before the fashion extravaganza decamps to Paris.

The Gucci expo is the most hotly awaited of the season as new creative director and former accessory designer Alessandro Michele unveils his first women's wear collection after taking over from the formidable Frida Giannini.

The rest of the week's line-up is packed: 68 catwalk shows, 80 presentations and 151 collections unveiled in total, along with numerous exhibitions and projects linked to Milan's Expo 2015 world fair, which kicks off in May.

Beyond the shining lights of the city's luxury stores in the renowned "golden triangle", workshops, showrooms and art galleries will also be opening their doors for the "5Vie" ("5 Streets") festival in the historic centre.

Those looking for upcoming talent will be sure to catch the presentation by Vienna-born Arthur Arbesser, who studied at Central Saint Martins and did seven years at Armani before striking out on his own, and has been shortlisted for the prestigious LVMH prize.

And of course no one will miss Italian-Haitian designer Stella Jean, a 35-year-old whose bold artisan prints have already been spotted on R&B superstar Rihanna.