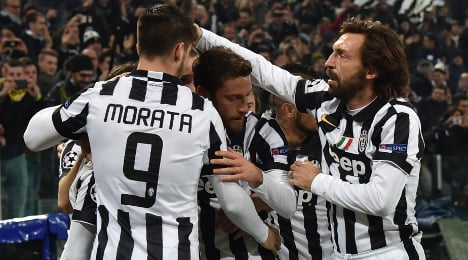 However, Massimiliano Allegri's hosts were left lamenting a stack of missed chances and conceding an away goal that could prove costly heading towards the decisive second leg on March 18th.

"We're happy we won at home, and we did that by putting in a solid display," said Allegri. "But I'm sorry we didn't put more goals away from the chances we created.

"It will be a difficult return match but I think we can still do well."

The away goal has given Dortmund a firm chance of qualifying for the quarter-finals after the second leg on March 18th, but coach Jurgen Klopp indicated that improvements will have to be made. Asked if he was angry, Klopp said: "Yes…it was a fair result and Juventus deserved the win.

"Particularly in the second half Juventus created a lot of chances that they didn't put away and we didn't create the chances we should have.

"They were good at closing us down and not allowing us to play our kind of game. On the goals we conceded, it was down to errors of positioning.

"These are problems we have to rectify but nothing has been lost. There's still everything to play for at Dortmund." added Klopp.

Allegri had warned of the threat of Dortmund's potent counter-attack, but it was from such a move that Tevez broke the deadlock on 13 minutes when he bundled the rebound from Morata's drive across goal past outstretched 'keeper Roman Weidenfeller. Juventus looked to be in their stride but their joy was ended minutes later following a howler by Giorgio Chiellini.

The central defender slipped on the edge of the area, missed the ball completely and clattered into Leonardo Bonucci, allowing Marco Reus to waltz in and collect before picking his spot against a rooted Gianluigi Buffon.

Juventus tried to hit back, Tevez cutting back for Morata at the byeline only for the Spaniard's header to spin wide of Weidenfeller's upright. But the reality of Dortmund's away-goal leveller appeared to take hold.

Juve looked out of sorts for long spells in the opening half as Borussia moved the ball around with ease, albeit without capitalizing. Allegri admitted: "We definitely struggled a little in the first half, when they closed down a lot of our passes."

On 33 minutes midfielder Nuri Sahin had time to unleash a long-range effort that swerved late before Buffon parried with both hands. Pogba looked far from his sparkling best and to make matters worse, Juve lost influential midfielder Andrea Pirlo on 37 minutes after he pulled up with a suspected hamstring strain. Yet Juve took the lead against the run of play just before the interval.

Tevez collected a long ball from his own half and set up Pogba on the left for the Frenchman to deliver a low cross which Morata glanced inside Weidenfeller's far post with the inside of his boot. Juve resumed in positive fashion but spurned several clear chances to put the result beyond doubt.

A great chance went astray just before the hour when Dortmund skipper Mats Hummels lost possession to Tevez in midfield but Pogba wasted the opportunity in the area after collecting Morata's long ball from the right. After ballooning over from ten yards out, Tevez edged closer when he fired a low drive amid a rabble of players which crept inches wide of the upright.

Dortmund saw a rare chance go amiss when Immobile fired a yard over Buffon's crossbar from 20 metres. He was replaced moments later by Jakub Blaszczykowski, prompting a tactical switch which saw Aubameyang move into the striker's role. But Juve continued to dominate.

Tevez was sent through on the right to force Weidenfeller into action and from the corner Chiellini was allowed to rise above Aubameyang to fire a powerful header just over.

Five minutes from full time Roberto Pereyra, who had replaced Pirlo, missed a great chance when he was sent through by Tevez only for his angled low drive to sneaked just past the far post.