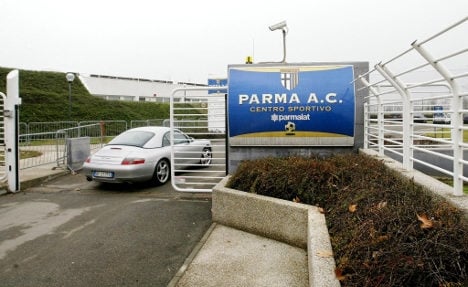 Parma has debts of up to €100 million and an unpaid tax bill said to stand at €17 million. Photo: Paolo Cocco/AFP

The heady days when they were owned by dairy giant Parmalat, whose riches helped build a talented team that played eye-catching football and won two Uefa Cups, a European Cup Winners' Cup and a European Super Cup, are but distant faded memories.

A further UEFA Cup followed in 1999 with a side coached by Alberto Malesani that included players of the calibre of Hernan Crespo, Gianfranco Zola, Tomas Brolin, Lilian Thuram, Gianluigi Buffon and Faustino Asprilla.

As well as the continental triumphs, there were Coppa Italia wins in 1992, 1999 and 2002, but now the club can no longer afford to pay its players. They cannot even afford to pay for stewards at the Stadio Ennio Tardini, a situation which led to the humiliation of having to postpone their Serie A game with Udinese last weekend. Days before that, bailiffs visited the stadium with repossession orders, seizing equipment from the club's gym.

The alarm bells were already ringing when they had to cede their place in this season's Europa League to Torino because of late payment of income tax on their players' salaries.

Things have come to a head as the club – coached by former Italy manager Roberto Donadoni – are now on the verge of ruin. A court in Parma on Tuesday set a date of March 19th for a bankruptcy hearing.

This is not the first time that the club has faced serious financial problems and some heart can be taken from the fact they have bounced back before.

Following success in the post-Nevio Scala era of Carlo Ancelotti – they finished a best-ever second in Serie A in 1997 – and then Malesani the club was declared insolvent in April 2004 after Parmalat went bust. Former club president and Parmalat founder Calisto Tanzi is still in prison after being found guilty on charges of fraud and embezzlement.

Parma's fortunes have fluctuated wildly since their reformation as Parma Football Club in 2004 and their purchase in 2007 by Tommaso Ghirardi.

While they enjoyed three successive top ten finishes in Serie A, including sixth place last term, the players' concerns about the financial security of the club – known as the 'Ducali' (The Duchy Men) – had already been aroused.

With debts of up to €100 million and an unpaid tax bill said to stand at €17 million, it is hardly surprising Parma's players have not been paid at all since last July.

In that time the club has seen two new owners – Albanian businessman Rezart Taci and current owner Giampietro Manenti – neither of whom have secured the necessary bank guarantees to drag the club out of the mire. Manenti "came to us with big promises, but so far we haven't seen a euro," added Lucarelli.

After the date of Parma's bankruptcy hearing was announced on Tuesday, Lucarelli added: "We've seen it all now. In the current situation the only thing I can see is for us to declare bankruptcy."

But in defiant fashion, he added: "If we have to pay our own way to travel to Genoa (this weekend) to play, we will."

Italian football federation president Carlo Tavecchio, meanwhile, has pledged: "Parma will finish the championship thanks to the help of fellow clubs who will put their hands into their own club coffers."

However, if Parma do go bankrupt, all their previous results from this season are expected to stand and the teams who were due to meet Parma in upcoming games will be awarded 3-0 victories.