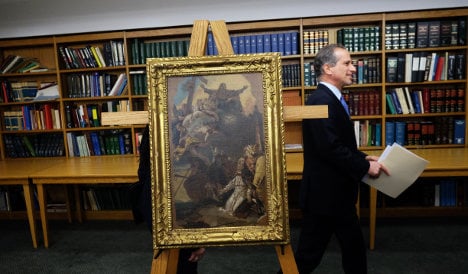 The painting, "The Holy Trinity Appearing to Saint Clement," is attributed to artist Giambattista Tiepolo and the bronze of Greek god Herakles dates from the 6th or 5th century BC.

The Tiepolo was stolen from a private home in the Italian city of Turin in 1982, resurfacing at a New York auction in January 2014, when it was seized by the FBI.

The statuette was stolen from a museum in the Italian coastal town of Pesaro in 1964 and was eventually discovered when it was offered for sale by an auction house in Manhattan, where it was also seized by the FBI.

"Both the Tiepolo painting and the Etruscan sculpture represent Italy's rich cultural history and today will be returned to their homeland," said Manhattan deputy US attorney Richard Zabel.

"For decades, two significant pieces of Italian heritage have been on the run… until today. We are proud to be able to return these key pieces of work back to the Italians," said FBI assistant director Diego Rodriguez.

Last May, US authorities handed back to Cambodian officials an ancient statue of a warrior which was stolen in 1972.

The 10th-century sandstone "Duryodhana bondissant" was snatched from a temple in Cambodia and first sold in London in 1975.

It was supposed to have been auctioned again at Sotheby's in New York in 2011 but the sale was stopped after Cambodian authorities made an appeal through Unesco.