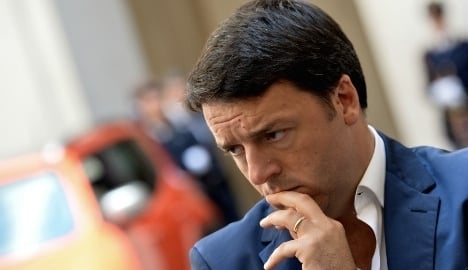 Italy's Prime Minister Matteo Renzi will join a call with US President President Barack Obama and other European leaders about the Ukraine crisis and other "global security issues". Photo: Tiziana Fab

The White House said Obama would confer with leaders from Britain, France, Germany, Italy and the European Union on a conflict that has now claimed more than 6,000 lives.

Washington and its European allies have accused Russia of fueling the conflict by sending troops and weapons across the border and propping up pro-Moscow separatists.

A series of internationally brokered truces have largely been ignored by belligerents.

Obama and other leaders have warned that Russia could face further sanctions if a ceasefire is not honored and heavy weapons pulled back from the frontlines.

The White House on Monday expressed its concern about "the continued efforts of Russia and the separatists that they back to flout the agreement that they signed just a couple of weeks ago in Minsk."

It urged Russia and the separatists to allow officials from the Organization for Security and Cooperation in Europe to monitor the weapons withdrawal.

A spokesperson for British Prime Minister David Cameron said the leaders' focus would be on implementation of the ceasefire agreement.

"I think the principal issue is Ukraine and the importance of the implementation of the Minsk international agreement," the official said.

They may discuss "going further on sanctions if the agreement is not adhered to."

"If the Russian government doesn't play its full part in ensuring the implementation of the deal in Minsk… we think there should be further sanctions."

The call will take place at 16:30 GMT, as Israeli Prime Minister Benjamin Netanyahu is due to make a controversial speech to the US Congress, arguing against a nuclear deal with Iran.

The agreement is a key foreign policy objective of the Obama administration, prompting a bitter and very public dispute between the US president and the Israel Prime Minister.