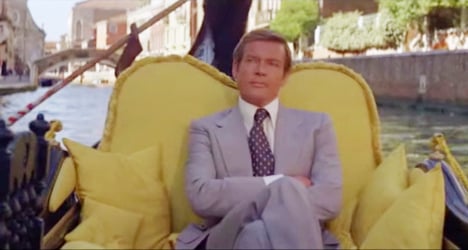 Bond, played by Roger Moore, in a gondola in Moonraker. Screengrab: Adrien Malbosc/YouTube

OK, the special effects aren’t that impressive – but then it's only the second Bond film ever made.

In this clip, taken from the end of the film, Sean Connery is being pursued by a squadron of boats from the global crime syndicate Spectre. They’re seeking revenge because Bond killed their agent Dr. No in the first film.

By a stroke of genius, the MI6 agent successfully sets the boats on fire, allowing him and Russian double-agent Tatiana Romanova to escape.

In this scene, taken from the tenth film in the series, Bond (Roger Moore) and Russian agent Anya Amasova are involved in a high-speed car chase as they leave the Sardinian base of their enemy, Stromberg. Not a nice man, Stromberg: he’s planning to destroy the world and create a new civilization underwater.

The pair narrowly avoid being killed – thanks to the fact that Bond’s car can convert into a submarine.

Although the underwater scenes were shot in the Bahamas, the car chase took place on the north coast of Sardinia on the Costa Smeralda.

At this point in the film, Bond is hurtling through the canals of Venice in a gondola that conveniently converts into a speedboat. In hot pursuit are the henchmen of Hugo Drax, who plans to destroy all life on earth.

Of course, 007 manages to escape, partly because his gondola-speedboat can also become a hovercraft.

In this Bond film, also starring Moore, 007 is assigned to hunt for a lost British encryption device which went down with a British spy ship, and prevent it from falling into the hands of the Russians.

His mission takes him to the winter sports resort of Cortina D’Ampezzo, which in real life has hosted the Winter Olympics. There, he’s chased by would-be assassins and takes the opportunity to show off his skiing skills.

The first to feature Daniel Craig as the MI6 agent, this film also features a scene in Venice – albeit of a more romantic nature.

In this clip, Bond is happily tootling about on the water with his new girlfriend Vesper Lynd, the beautiful yet brutal Treasury agent who’s been helping him on his latest mission.

He emails his resignation to MI6 so he can spend more time with her – unaware that she’s been working against him.

Also starring Craig, this film is a sequel to Casino Royale. In the opening sequence, Bond is seen steaming along in his Aston Martin – with villain Mr White stowed away in the boot – as he tries to escape his pursuers.

All very exciting but it’s also a perfect excuse for some quality sightseeing.

Concentrate hard and you might recognize Lake Garda and the Fantiscritti marble quarries of Carrara. Bond then passes through Piazzetta della Paglietta on his way to the MI6 safe house in Siena.

All the footage of the race, which was spliced into the film, is real. We next see Bond in a thrilling rooftop chase, filmed in Siena.

And as a taster for what’s to come… Here’s a peek at a car-chase scene by the Colosseum from Spectre, which will be released later this year.