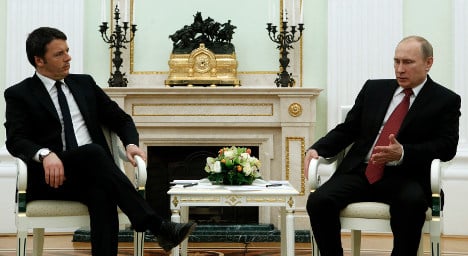 Renzi held talks with President Vladimir Putin in a visit that also focused on the conflict in Ukraine and Russia's chilly relations with the European Union over its backing of separatist rebels in eastern Ukraine.

Renzi began his visit by laying flowers on a bridge where opposition politician and former deputy prime minister Boris Nemtsov was gunned down near the Kremlin on Friday night.

Then he raised one of his country's most pressing concerns with the Russian strongman: the chaos in Libya which has seen thousands of migrants flee to Italy and also sparked fears of a new stronghold for jihadists to launch attacks on Europe.

"We need a strong international response" to the crisis in Libya, Renzi said in comments published on the Russian presidency's website.

The Tass news agency quoted Renzi as calling for joint efforts to fend off "terrorism and religious fanaticism."

He said Russia's role in the UN Security Council and its relations with Egypt could provide crucial help in finding a solution to the Libyan crisis.

"I am confident that the Russian Federation may play a decisive role in resolving the problem," Renzi said.

Putin said he supported UN mediation efforts and called for a peaceful resolution of the crisis in Libya, which has been wracked by conflict since the overthrow of dictator Moamer Kadhafi in a 2011 Nato-backed uprising.

Rival governments and powerful militias are battling for control of key cities and the country's vast oil riches, and the chaos has provided fertile ground for the Islamic State group.

"We had a detailed discussion of the terrorist threat coming from the Middle East and North Africa, particularly the sharp deterioration of the situation in direct proximity to Italy – in Libya," said Putin.

Renzi's visit to Russia came a day after he held talks in Kiev with Ukraine's President Petro Poroshenko.

Italy and Russia have long had strong ties, but like the rest of the European Union, Rome slapped sanctions on Moscow for its role in the Ukrainian crisis.

When he announced his visit Renzi said he wanted to relay the message that "if Russia returns to the international table we will all be more at ease."

"We, of course, exchanged views on the Ukrainian crisis," said Putin, adding Renzi had "made valuable proposals regarding what could be done to achieve a settlement. The situation there, as we all know, remains complicated. At least combat action has been stopped, people are not dying and towns are not being destroyed."

League leader Matteo Salvini at the party's annual rally in Pontida in September 15. Photo: Miguel Medina/AFP
Some eight special trains and 400 coaches are ferrying in supporters from across the country for the “Italian Pride” demonstration, with the crowds also set for a speech from former prime minister Silvio Berlusconi.
Salvini, head of the far-right League party, pulled support from the previous populist government over the summer in a bid to spark elections he was convinced he could win to govern the eurozone's third-largest economy alone.
That plan failed when his former coalition partner, the anti-establishment Five Star Movement, sealed a deal with the centre-left Democratic Party to form a new government. But after suffering a blip, the League's popularity has risen again in opposition.
Recent polls put the anti-immigration party at between 30 to 33 percent of voter intentions, well ahead of the Five Star (M5S) and Democratic Party (PD), which have dropped slightly to between 18 and 20 percent each.
With the current left-leaning government seeking to change the electoral law to prevent Salvini triumphing alone at the next elections, the 46-year old hopes to unite parties on the right and centre-right under his leadership.
Forza Italia head Berlusconi, 83, whose party has been in a lengthy slump, appears open to just such an alliance, along with the smaller, far-right Brothers of Italy.
Salvini in August had refuted the idea of a tie-up with Forza Italia, saying the League “needs nothing and no-one”. Nevertheless, Salvini has a reputation for changing his mind so often on so many issues that he should come with a warning that his statements were “irreversibly reversible”, editorialist Mattia Feltri wrote this week in the Corriere della Sera newspaper.
Neo-fascist party CasaPound is also expected at Saturday's rally, while a small counter-protest will be held in a nearby square.
City needs love
Political analysts say Salvini has set his sights on taking Rome and hope the right-wing alliance could carry him to victory in key upcoming regional elections, potentially setting him up for a win on a national level.
He “is doing what he fundamentally does best: opposition on the ground. Among the people,” said the Open news website.
The next general election is not due until 2023, but the current governing coalition of former foes is shaky and may not last.
Salvini has waged war on Rome's mayor, M5S member Virginia Raggi, calling for her resignation, and will circulate a popular petition Saturday demanding she step down now, two years before her term is due to end.
The League head took part in a sit-in against Raggi earlier this month. He then did Facebook live videos from places he says symbolise the city's decline, from an abandoned stadium to a residential area besieged by illegal dump sites.
“We need a mayor capable of loving this city and cleaning it up,” he said to Raggi, telling her to go back to being a mum.
'Hands off Rome'
Raggi, 41, has come under intense fire for the city's ongoing garbage crisis and beleaguered transport services, which have existed for decades. She has blamed the problems on organised crime and corruption in previous administrations.
“Hands off Rome,” she tersely replied to Salvini on Twitter.
The League leader has found an unlikely ally in his battle against Raggi in former prime minister Matteo Renzi.
Beyond that, the two Matteos profess to have little in common. As Salvini rallies Saturday, Renzi will be drumming up support for his new centrist Italia Viva party at a Florence convention.
SHOW COMMENTS