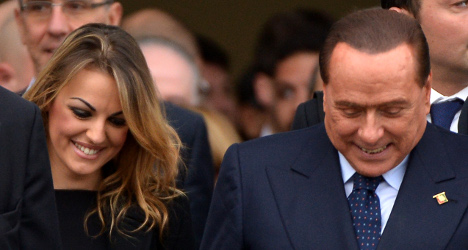 The former premier made the complaint in a wiretapped phone conversation used as evidence in a prostitution case centred around the billionaire’s parties.

Transcripts of conversations between Berlusconi and Gianpaolo Tarantini, a businessman accused of procuring prostitutes for the former prime minister, were released on Thursday to the Italian media and laid bare the daily life of the politician in 2008 and 2009.

In numerous conversations the pair discussed the women to be invited to meet Berlusconi, with Tarantini in September 2008 promising to “send you a little angel” to help with his back pain.

Tarantini is one of seven people on trial in Bari for involvement in the alleged prostitution ring, while Berlusconi stands accused of bribing his friend to lie about the supposed sex parties.

“This evening I have two girls,” Berlusconi tells Tarantini on the phone, talking about a “very sweet” woman from Naples and a 21-year-old Brazilian woman.

The ex-premier also suggests who should be invited to his parties, requesting a pair of Cuban singers and another woman whom he claims sings at the Vatican.

Despite discussing at length the women in his life, Berlusconi appears unhappy at the power of his charms.

“This has always been my problem, women that fall in love. It’s something that has pursued me my whole life,” he says in the wiretapped conversation, published in Italian media.

Berlusconi was at the time of the wiretaps serving his third term as prime minister, a role which he notes interrupts his active social life.

“Unfortunately I have a bilateral with [Angela] Merkel,” he tells Tarantini, turning down a dinner invitation for the meeting with the German leader.

Berlusconi also refers to his “working for the whole world…for America, for Russia,” by trying to arrange meetings and overcome “misunderstandings” between the presidents of the US and Russia.