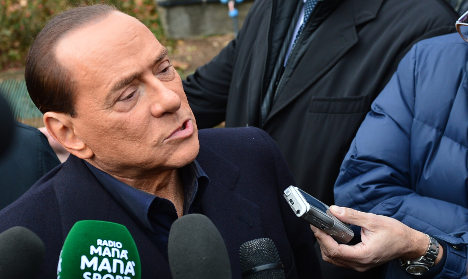 Speculation surrounding the sale or part sale of the seven-time European champions has swirled in recent months with Taechaubol now touted as the leading contender to purchase a sizeable share in the legendary Serie A club.

But a report in Sunday's La Gazzetta dello Sport claimed Berlusconi and Taechaubol held a meeting at Berlusconi's family home in Arcore last week where a "preliminary agreement was put down in black and white".

It said a financial broker from the Rothschild bank was in attendance for the signing of a 'memorandum of understanding' between the parties and that the proposal would "now go through a process of due  iligence".

The deal would see Taechaubol acquire a 30 percent share in the club at the end of May for €250 million. If Berlusconi goes back on the decision he would be liable to pay a penalty amounting to 10 percent of the price of the €250 million stake.

Taechaubol, the executive director of a south-east Asian private equity group, admitted his interest in the club last month.

"I do not deny the interest for a possible share acquisition into such a prestigious club such as AC Milan, but at the moment it's only cordial and private discussions with representatives from the AC Milan group," he said on February 18th.

Rumours of a possible deal between the parties resurfaced at the end of last week, prompting Berlusconi's Fininvest company to issue a statement which effectively suggested the former two-time Italian prime minister wants to retain a majority share in the club.

"Following the recent media reports, Fininvest reiterates it is not interested in selling majority shares of AC Milan," said the statement.

"All we can do is confirm what we already stated on February 14: that various parties have shown an interest in investing in the club but that no concrete discussions have taken place."

Club CEO Adriano Galliani would not confirm the deal had been signed but told Sky Sport: "I can't speak about Milan because it is not up to me. Milan has belonged to Silvio Berlusconi for 29 years, so any kind of comment is up to Fininvest and not me."

Fininvest last month played down reports Berlusconi had rejected an offer of €970 million ($1.1billion) for the embattled Serie A club but was willing to sell a minority stake if it came with a pledge to help build a new stadium.

The reports claimed Berlusconi rejected a Singaporean-led bid to buy the club for €970 million.

According to Gazzetta's report on Sunday, the preliminary agreement between Berlusconi and Taechaubol fixed the value of Milan at €800 million.

Gazzetta's report on Sunday, however, suggested Berlusconi has an alternative plan to sell the entire club and has contracted the Lazard bank – who brokered the deal between Inter's former president Massimo Moratti and Thohir – to find a suitable buyer.