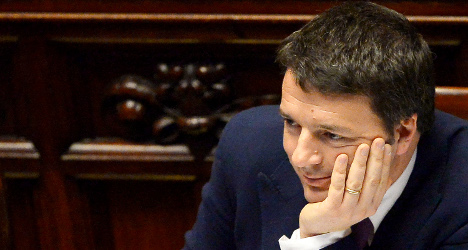 Berlusconi, whose "bunga bunga" sex case is under review at the country's top court, had called for his Forza Italia party to vote against the key constitutional reform bill in the lower house of parliament.

"It is a difficult day, I ask you to remain united," the former premier wrote to his lawmakers, according to Il Fatto Quotidiano daily, as the 78-year-old vowed to reclaim his leadership of the centre-right and challenge Renzi.

But the reform bill – which still has to go before the upper and lower houses for a second time – passed by 357 votes to 125 against, and 17 of Berlusconi's lawmakers publicly protested against the billionaire's orders.

"Reform vote ok in the lower house. A country more straightforward and fair. Well done," Renzi said on Twitter, ignoring the political tantrum by Berlusconi, who was lashing out at the prime minister after a deal between the pair broke down.

The reform aims to substantially reduce the powers of the upper house, ending the system of "perfect bicameralism," by which the two branches of parliament have equal weight in confidence votes and in passing and blocking laws.

The plan is to transform the Senate into a small chamber of regional lawmakers with sharply reduced powers, a move which would stop bills getting bogged down in a back-and-forth between the lower and upper chambers.

They would remove the Senate's power to hold votes of no confidence and significantly reduce the number of senators, essentially making the Chamber of Deputies the main legislative branch.

The Forza Italia leader has since vowed to fight intertwined proposals to effectively abolish the Senate and introduce a new electoral system designed to produce governments with working parliamentary majorities.

On Tuesday, Italy's Court of Cassation in Rome was reviewing the media magnate's acquittal on charges of paying for sex with an under-age exotic dancer known as "Ruby the heart stealer."

It could decide to uphold the acquittal or send the case back to appeal, prolonging Berlusconi's legal woes.

The ageing magnate finished his community service for tax fraud this weekend and hopes to relaunch his political career, challenge 40-year old Renzi and chase off competition from rising far-right star Matteo Salvini.