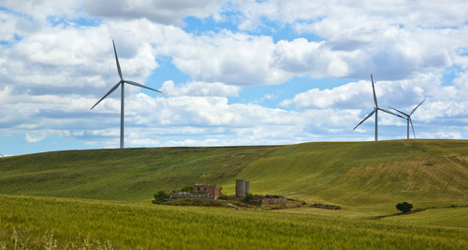 Italy’s renewable energy use has nearly tripled in less than a decade. Italy energy photo: Shutterstock

Italy’s renewable energy use has nearly tripled in less than a decade, from 5.6 percent in 2004 to 16.7 percent in 2013, statistics agency Eurostat said on Tuesday.

Such progress marks Italy out for leapfrogging other nations, with the overall EU average moving from 8.4 percent to 15.0 percent in the same period.

While Italy is on track to meet its 2020 target of 17.0 percent, it is other nations which stand out as veritable beacons of green energy use.

In Sweden,52.1 percent of the country’s energy came from renewable sources in 2013, while Latvia boasted 37.1 percent and Finland 36.8 percent.

Luxembourg stood out as having the least progressive energy use, with just 3.6 percent coming from renewable sources. Malta was not far behind, with 3.8 percent, while the Netherlands registered just 4.5 percent.

The UK is also falling well behind its targets, with green energy accounting for just 5.1 percent of the country’s consumption in 2013.

Speaking in Rome, David King said green energy sources are “no longer seen to be a threat to our economic growth.”

Rather than spending vast sums importing fossil fuels from abroad, Italy needs to “use indigenous energy sources above all else”.  Solar power should be sought both at home and abroad, he added, with North Africa representing a “tremendous opportunity” for green energy.

“Just across the Mediterranean, not far from Italy, there is an enormous source of solar energy – the Sahara desert – and there’s no reason why that shouldn’t be farmed,” he said.

Plans are already in place to channel solar energy from Tunisia to Italy; a project which could be fuelling the European energy grid by 2018.