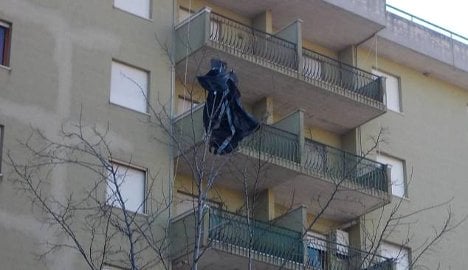 Police were called to an apartment block in Porto Recanati, on Italy’s eastern coast, after locals raised the alarm that an Isis sympathizer may be within their midst.

The officers searched the building and questioned residents, but were unable to recover the mystery black cloth spotted hanging from a tree next to the apartment block.

On further investigation police discovered that the supposed propaganda tool was nothing more than a jacket, swept into the trees after being hung out to dry, Corriere della Sera reported on Wednesday.

The false alarm follows months of threats made against Italy by Isis, in addition to fears home-grown terrorists may carry out an attack in the country. Such worries have also been felt elsewhere in Europe, with police in Sweden recently called to a residential building to investigate Isis propaganda.

A passerby contacted the authorities after spotting the initials of Islamic State, another term for Isis, in an apartment window. What the vigilant person read as “IS” was, however, a set of birthday for a woman’s 21st birthday.

After laughing about the mistake, the residents agreed to take down the balloons to avoid further confusion.