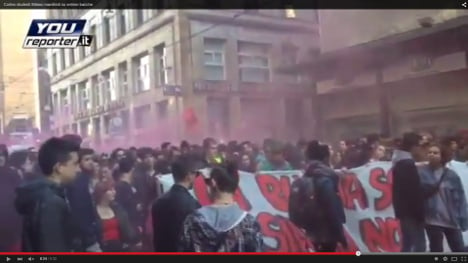 One 15-year-old protester was arrested during a march in Milan which saw eggs, stones and smoke bombs thrown by students, news agency Ansa reported.

Around 1,000 students were blocked by police in via Melchiorre Gioia, while some sprayed red paint at officers who responded with tear gas.

In Rome students gathered in Piazza della Repubblica where protesters threw coloured smoke bombs and brandished a banner reading: “March 12th, a generation that does not give up”.

“This is yet another attack on public schools. Let’s go back to the streets to reclaim our rights. Greece is an example to follow for the fight against austerity,” a protester was quoted as saying.

At a protest in Turin attended by some 200 students a banner read “Stop Buona Scuola, a step backwards.”

The controversial reform package includes plans to give permanent contracts to teachers who are employed on a temporary basis.

Despite previous announcements, the government is expected to scrap its plan to increase teacher salaries based on merit rather than seniority.