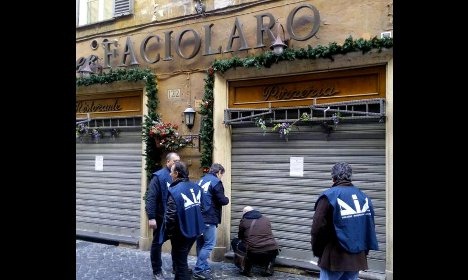 Er Faciolaro was one of two restaurants to be seized by police. Er Faciolaro photo: Carmine Flamminio

The national anti-mafia unit said the two restaurants, La Rotonda and Er Faciolaro, were controlled by alleged mobster Salvatore Lania and used to recycle millions of euros generated by what is now Italy's most powerful criminal organization.

Separately, financial police in Calabria, 'Ndrangheta's southern homeland, said they had issued 11 arrest warrants and sequestered property, companies and other assets in an operation targeting the Piromalli, an alleged "family" or clan of the 'Ndrangheta based in the port of Gioia Tauro.

Lania was arrested on charges of fraudulently registering the Rome restaurants and a nearby souvenir shop as belonging to other people when he was, in fact, the beneficial owner.

All three businesses are located close to the Pantheon and other landmark sites in the Italian capital's historic centre.

A recent study by Coldiretti, the body which represents Italian farmers, estimated that at least 5,000 restaurants, bars and other eating places across Italy are in the hands of organised crime.

Anyone eating at either of the two Rome restaurants would have had no idea that they were run by the mob.

A review of La Rotonda on Tripadvisor notes: "Service was excellent and staff very friendly and funny."

The anti-mafia unit said Lania's ownership of the restaurants and his involvement with 'Ndrangheta had emerged as a result of their investigation into the so-called Alvaro clan's activities in Rome.

They suspect he was involved in the gang's smuggling of counterfeit goods made in China into Europe through Gioia Tauro with the support of the Piromalli family.

'Ndrangheta has emerged as the most powerful of Italy's mafia groups thanks to the huge profits it has made through its role as the principal importer and wholesaler of cocaine produced in Latin America and smuggled into Europe via north Africa and southern Italy.

Recent arrests have confirmed the secretive, ritual-obsessed group's expansion beyond Calabria to both Rome, where it has been involved in a deadly turf war over cocaine prices, and the wealthy industrial cities of northern Italy.

It also has well-documented links with Colombian producer cartels, Mexican crime gangs and mafia families in New York and other parts of North America.

The group has however suffered some setbacks of late.

In January Italian authorities ordered the arrest of 160 alleged members and claimed to have dismantled several of its "mafia entrepreneur" networks in northern cities.

That followed the arrest of dozens of alleged mobsters linked to the group in Milan in November 2014 – an operation which uncovered secretly-filmed footage of 'Ndrangheta's initiation rites.

The quasi-religious ceremony involves would-be members swearing allegiance to their "wise brothers" before taking an "oath of poison" which requires them to kill themselves should they ever betray fellow clan members.

The 'Ndrangheta is not the only problem Rome faces with organised crime.

More than 100 people, including former mayor Gianni Alemanno and prominent business figures, are curently under investigation in a probe into a criminal network suspected of skimming millions from public funds for years.

Police in charge of the "mafia capitale" investigation believe the network was run by Massimo Carminati, a notorious one-eyed underworld figure with links to the far-right.