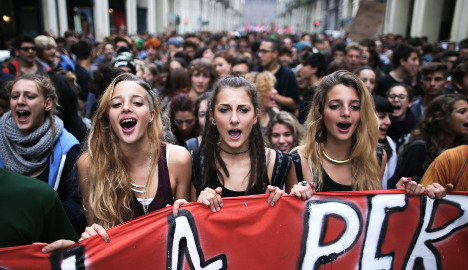 "The school reform is the most important for the country, we are proud of it," Renzi told journalists, brushing off criticism that he has watered down a project which initially promised to make the system more meritocratic.

The bill, which still has to go before parliament, has sparked protests in the north of the country on Thursday, with hundreds of student demonstrators clashing with riot police in Milan.

"The ball is now in parliament's court. The proposals can be implemented fairly quickly, with great intensity, if parliament works with a sense of urgency. I am very optimistic," Renzi said.

The PM said the bill would give schools greater autonomy by making it the school head's job to handpick teachers, and bring greater transparency to the system, with curriculum vitae and school financial records made public online.

Teachers would also be given a 500-euro ($530) bonus each year to be spent on cultural activities, such as tickets to a concert.

Renzi said a previous plan to scrap salary rises linked to years in the job had been dropped, but insisted it did not mean the government was going back on promises to reward excellence, with €200,000 earmarked for bonuses.

Permanent contacts will be rolled out for 100,000 substitute teachers by September 2015 if the bill goes through, with others following for 23,000 nursery school teachers a year later.

In November last year the European Court of Justice ordered Italy to regularize substitute teachers who had worked for over 36 months on precarious, short-term contracts. Italian media at the time put the number concerned at 250,000.

Renzi, who has made the school reform one of the cornerstones of his mandate, said pre-school children would get English lessons and history of art and music would return to the curriculum.