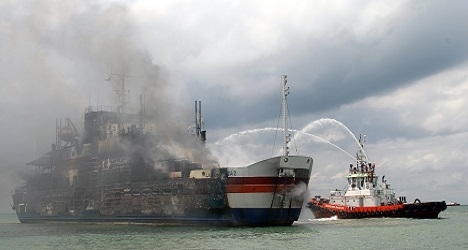 The audio recordings, which are stored in the ship’s Voyage Data Recorder (VDR), the equivalent of a black box, are necessary to determine how the emergency was managed on the ship during the fire and if the fire was tackled correctly.

As part of emergency procedures, the captain of the ship deactivates the device to stop any previous information being overwritten.

According to Corriere della Sera, captain Argilio Giacomazzi followed procedure but it is still unclear if there was any negligence in the chain of command during the fire.

Investigators have so far been unable to extract the audio recordings from the VDR which was damaged in the fire.

“A large part or perhaps all the audio recordings are missing. It’s very strange,” an investigator was quoted as saying. The only possibility to recover the recordings is to use software from the manufacturers.

But the legal team “Justice for the Norman Atlantic”, which represents the family members of some 20 passengers, is not optimistic.

“We know there are difficulties, no one seems to know how to extract it (the information). I’m told that perhaps something went wrong when the copies were made and we cannot exclude the possibility that the audio files are not present in the original hard disk,” lawyer Alessandra Guarini said.

At least 11 people lost their lives after the ship, which was travelling from Greece to Ancona, north-eastern Italy, caught fire off the coast of Albania before dawn on December 28th.

Eighteen people are still missing, including 16 paying passengers and two Syrian men reported missing by their families. Investigators fear the number could be higher after three stowaways were rescued alive from the burning ship.

Rescue services took more than 24 hours to get survivors off the blaze-hit boat, which was then towed to the Italian port of Brindisi.