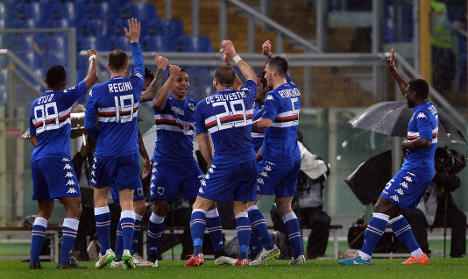 Roma welcomed Sinisa Mihajlovic's side hoping to reduce their deficit to Juventus after the league leaders took their advantage to 14 points with victory over Palermo on Saturday.

But on a night of high drama at a rain-lashed Stadio Olimpico, Rudi Garcia's men were left lamenting a series of missed first-half chances when Di Silvestri, then Muriel, struck in the second half.

The Giallorossi, jeered off the pitch by an ever-dwindling crowd of home supporters, remain in second place but with a 14-point deficit and 11 games remaining Juventus have one hand firmly on their fourth consecutive title.

It was only Roma's third defeat of the campaign, but their second in 10 games – which also saw Garcia's men draw a remarkable eight times.

Having gamely battled with Turin giants Juventus for most of the season, Roma now face a far more localised challenge – with city rivals Lazio – to secure the league's second automatic spot for next season's Champions League.

"There are other teams chasing us now, so as of Sunday (away to Cesena) it's imperative that we start taking some points," Garcia told Sky Sport.

Earlier, a brace of goals by Brazilian sensation Felipe Anderson saw Lazio tighten their grip on third place and move to within a point of Roma.

Garcia stopped talking of his side's scudetto chances weeks ago, and the Frenchman added: "For the first hour, certainly for the opening half, we had the lion's share of the chances but we just couldn't find the net.

"They scored on their first real chance and after they went 2-0 up and we were down a man it just made it harder to fight our way back.

"We have to look forward, try to digest this defeat and look towards progressing in the Europa League at home (to Fiorentina) on Thursday."

Roma spurned several chances in a busy first half, captain Francesco Totti notably off target on at least three occasions before Gervinho then Miralem Pjanic threatened on the stroke of half-time.

Juan Iturbe set Gervinho free down the left but Pjanic slid in late to meet the Ivorian's squared ball only for Viviano to hold the ball firmly on his goalline.

Viviano then pulled off a great one-handed reflex save to deflect Gervinho's shot with the outside of his left boot.

Roma resumed in positive fashion after the break but Totti, again, failed to hit the target when he connected with Alessandro Florenzi's free kick to the back post.

Those misses proved costly when Samuel Eto'o ran unchallenged along the byeline to deliver for Di Silvestri, who brushed off Florenzi to bundle the ball past Morgan De Sanctis from close range.

Garcia replaced a tiring Totti with Daniele Verde minutes later and although the teenager added some thrust, Sampdoria's defiance only grew.

The visitors grabbed their second in incredible fashion 12 minutes from the end when Muriel capped a long run down the left with a shot that came off De Sanctis's far post.

It rebounded back out and after an exchange of passes between Eder and Alfred Duncan, the Colombian striker fired home to virtually seal the points.

Roma tried to reduce the arrears but Verde's long-range effort was tipped over by Viviano, who then did well to tip Pjanic's curling strike round his far post at full stretch.

Sampdoria's flamboyant president Massimo Ferrero could not hide his joy. Wrapped in the Genoese club's scarf, he stole the spotlight from Mihajlovic.

"I can't believe it. Winning at the Olimpico was my dream. It was too emotional for me," said Ferrero.

Mihajlovic said: "We knew we needed courage to win this game but despite running the risk of conceding a goal we came here to win."