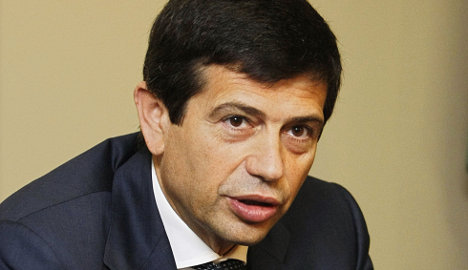 "Had it (the €10,000 Rolex) been offered to me, I would not have accepted," Transport and Infrastructure Minister Maurizio Lupi said as he attempted to defuse a political storm over what he described as a graduation gift from a family friend.

"No, I have not thought of resigning, even though seeing my son being unjustly shot down has made me ask myself for the first time if it is worth all the bother," Lupi said in an interview with La Repubblica.

Breaking his silence on the scandal, Prime Minister Matteo Renzi promised tougher penalties for anyone taking, offering or soliciting bribes and vowed to abolish statutory limitations on prosecution for corruption.

Renzi has made a more effective fight against the country's deep-seated graft problem a priority in his bid to shake up how Italy is run.

But his government's credibility on the issue has been dented following the announcement on Monday that judges are investigating suspected kickbacks running to billions of euros which inflated the cost of major public works by up to 40 percent.

Four people have been arrested on suspicion of rigging tenders, including a consultant and former official who served in seven governments. More than 50 others were placed under investigation.

Rodolfo Sabelli, the president of the national magistrates organization, said the scandal reflected a culture in which, "judges are slapped down and the corrupt are caressed".

Renzi called that criticism "false, unjust and damaging, not just to the government in office, but to the institutions themselves".

He said changing deeply engrained attitudes to corruption would take years but his government had made a positive start by activating a national anti-graft authority.

"Before it was only an acronym. We took it and put it to work so that tender by tender, case by case, dirty deal by dirty deal, it can intervene and clean things up," Renzi said.

The major projects subject to the probe include the construction of Italy's pavilion at the upcoming Expo 2015 world fair in Milan, the Florence stretch of a high-speed rail link, motorways, underground train projects in Rome and Milan and a new port on the island of Sicily.

Judges suspect former public official Ettore Incalza was central to skimming cash off the projects and that businessmen Stefano Perotti was a beneficiary.

It was Perotti who bought minister Lupi's son the €10,000 Rolex and also organized a post-graduation job for him. Lupi says claims of cronyism are absurd since his highly-qualified son could have found better paid work elsewhere.

The scandal has evoked memories of the "tangentopoli" scandal of the early 1990s, which led at one point to the indictment of half the country's lawmakers.

Italy's employers organization estimated in a report in December that the failure to take decisive action to stamp out corruption then has cost the country €300 billion in lost economic output over the intervening years, primarily because of the negative impact it has had on inward investment.

Commentators suggested Renzi would find it hard to make an example of Lupi, as the minister is a leading member of junior coalition partner the New Centre-Right (NCD).

The premier needs to keep his governing alliance if he is to get through upcoming parliamentary tests for his proposals to radically reform the legislature, by abolishing parliament's upper house and introducing a new electoral law intended to guarantee that nationwide votes produce majority governments.