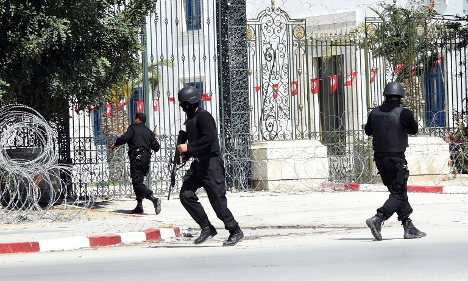 An unknown number of Italian museum visitors were freed when security forces stormed the building, killing two gunmen. An estimated 23 people have been injured.

At least two unidentified men reportedly attacked the building after attempting to enter the nearby parliament building.

17 tourists among 19 killed in an attack on the Bardo museum in Tunisia, according to Prime Minister Habib Essid pic.twitter.com/rbJA3n1oNY

Italy's foreign ministry on Wednesday would not confirm the Tunisian premier's statement, with a spokesman telling The Local checks were underway. The Italian embassy in Tunis could not immediately be reached for comment.

Gentiloni said the attack was "without precedent" and demanded increased security efforts.

"Tunisia was a country of hope," he told journalists, in which a moderate Islamist party governs alongside secularists.

Gentiloni called for a "strong response from the international community" and said the Bardo attack would reinforce Italy's "determination against terrorists".

Both the foreign minister and Matteo Renzi, Italy's prime minister, sent their condolences to the victims. "Our thoughts go out to the people involved, their families and the government of Tunisia," Renzi was quoted by Ansa as saying.

Following the attack Donald Tusk, president of the European Council, said the EU "stands with Tunisia in its commitment to peace and democracy".

"I am shocked by today's terrorist attack at the Bardo museum in Tunis," Tusk said in a statement.

"The European Union and Tunisia will not be intimidated by terrorism, at home or abroad. We are ready to support the Tunisian government in its actions against violent extremism and commend its speedy action to free the hostages involved," he added.

Cruise ship company Costa Crociere said one of its liners, with 3,161 registered passengers, was docked in Tunis at the time of the attack. All excursions were cancelled and passengers recalled on board following the shootings, the company said in a statement.

The Bardo museum is internationally-renowned for its collection of mosaics and is visited regularly by groups of tourists, many disembarking from Mediterranean cruises.