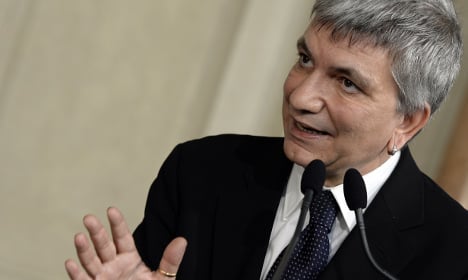 Nichi Vendola said he woud consider having children and hopes to get married. Photo: Andreas Solaro/AFP

Vendola, the president of Puglia and leader of the Left, Ecology and Freedom party (SEL), told Chi magazine he would like to marry his partner of ten years, Ed.

His announcement came as Prime Minister Matteo Renzi said he aims to legalize same-sex unions before May.

Leaders from both the political left and right agreed last year on the principle of civil partnerships, although they are yet to formally bring the debate to parliament. Despite Vendola’s wishes, gay marriage is currently off the negotiating table.

Vendola is one of only two gay regional governors in Italy, the second, Rosario Crocetta, being the president of Sicily,

He told Chi that he would consider having children after leaving government.

“As soon as I’ve left the role of governor I will also reflect on whether to take on fatherhood or not.

“It’s a thought that rests in a corner of my life and one which I have always pushed back. Certainly, I have always loved the world of childhood and I would like to write a book of nursery rhymes for children,” said Vendola, who is already a published author.

Vendola said Dolce’s view and the designer’s subsequent defence by Stefano Gabbana, his business partner at D&G, showed the duo did not understand the damaging impact of anti-gay sentiment in Italy.

“I think that from their lofty social rank they don’t really understand what it means to say to live in a country where homophobia kills and the deficit of rights weighs on a lot of lives,” Vendola said.

Dolce’s comments caused as international storm when pop star Elton John, who has two children with his husband through a surrogate mother, slammed the designer’s opinion as “archaic thinking”.