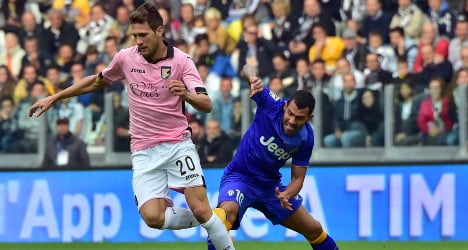 Palermo's Argentinian-born midfielder Franco Vazquez and Brazilian-born Sampdoria striker Eder were among three new faces named by Conte in a 26-man squad for upcoming games against Bulgaria, and England.

Their call-ups come as Italy look to rebuild after their disastrous exit from the first round of the World Cup for the second successive edition. But the choices did not sit well with everyone.

Inter Milan coach Roberto Mancini told reporters in Rome on Monday: "If you play for Italy you should be Italian."

When reminded that Germany won the World Cup with players born to immigrant families, Mancini replied: "But their players were born in Germany.

"I believe an Italian player deserves to play in the national team, while those who are not born in Italy, even if they have Italian family, shouldn't have that right.

"We do so much to train young players and in the end we draft in some 'oriundi' (players born to Italian emigrants). It would be better to bring our own young players through.

"But if these are the rules, Conte is free to apply them as he pleases. I have my own opinion."

Once the pride of Italy, the Azzurri have struggled on the world stage in recent years and Mancini's remarks have fuelled a decades-long debate about the role and influence of the 'oriundi'.

Although the tradition has not always born fruit, Italy, and to a lesser extent Spain, has a long history of turning to foreigners whose ancestors emigrated from Italy – if their footballing talents match requirements.

"If I remember correctly there was one of them (oriundi) in our team when we won the 2006 World Cup," said Tavecchio.

"But Conte has absolute freedom to select whoever he wants to play. If a player has citizenship, he is eligible. He's an Italian citizen, so there's no debate."

Former Juventus star Camoranesi was born and raised in Argentina but was able to represent Italy through a great-grandparent who emigrated to South America in 1873 from Potenza Picena.

Osvaldo was born and raised in Argentina but qualified through an Italian great-grandfather who emigrated in the 19th century.

Buenos Aires-born Palletta even played alongside Lionel Messi and Sergio Aguero at under-20 level for Argentina, but being born to Italian parents – and not having represented Argentina at senior level – he easily became eligible to play for the Azzurri.

Palletta made his World Cup debut in Brazil, where the four-time World Cup winners – then coached by Cesare Prandelli – returned home in disgrace after notably being humbled by Costa Rica.

Conte conceded his squad should "not be a fallback for players who can't get into their own national teams."

But he ultimately defended his decision: "I am not the first and will not be the last to call up these oriundi.

"At the last World Cup, 83 of the over 700 players were not native born. These are the rules.

"I think we should get the best we can and you should not expect any shortage of players who want to get into the national team."

If they haven't made their debut by then, Vazquez and Eder could do so three days later when Conte's men host England in a friendly in Turin.

Eder's agent Andrea Bagnoli told Tuttomercatoweb: "It's a dream come true for him."

"Vazquez's mum is Italian, so he's more Italian than him (Mancini)!" said Iachini. "If someone feels like they belong on the basis of an emotional bond, then all these arguments amount to nothing."