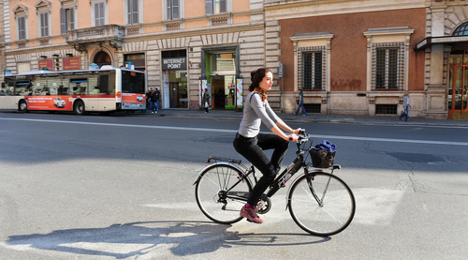 Rome's efforts to improves its poor public transport and get citizens cycling have had little impact. Rome photo: Shutterstock

The Italian capital’s efforts to improve its poor public transport and get citizens cycling have had little impact, according to the European City Ranking released on Tuesday.

“The city’s plans are not ambitious enough to improve the poor air quality,” the European climate researchers said.

Rome was slapped with an F grade and ranked the third-worst of 23 European cities evaluated, just above Lisbon and Luxembourg. The cleanest air can be found in Zurich, Copenhagen and Vienna.

Milan sat in the bottom half of the table, moving from an F grade in 2012 to a D- this year. Italy’s financial capital won praise for its active promotion of public transport and cycling, as well as introducing the country’s first congestion charge zone.

The city nonetheless “has a serious air quality problem” and is described as “the European region with highest population and industrial density” by researchers.

Milan’s efforts to improve air quality have been helped by the upcoming Expo world fair, which has led to significant investment in public transport and the addition of 1,000 electric bicycles to the city’s network.