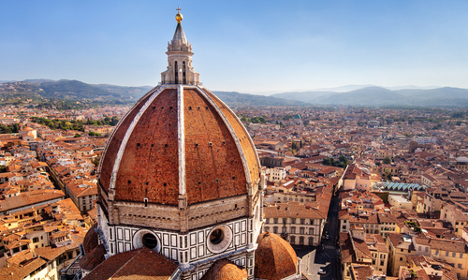 The dome of Florence’s cathedral is celebrated as an architectural masterpiece. Dome photo: Shutterstock

The Japanese woman was spotted on Monday morning scrawling her name and the day’s date onto the dome’s marble.

Staff alerted police, who through an interpreter charged the 48-year-old woman with defacing the cathedral.

She was, however, let free on bail and did not permanently damage the dome, as she used eyeliner on the marble, La Nazione said.

The dome of Florence’s cathedral, created by Filippo Brunelleschi in the 15th century, is celebrated as an architectural masterpiece. The work broke engineering boundaries and to this day is the symbol of the Tuscan capital, attracting millions of visitors each year.

Florence’s popularity has, however, led to some unfortunate incidents, including a 2013 case in which an American tourist snapped the finger off a 600-year-old statues.

Last year, another American was caught peeing in Florence’s Piazza Santa Croce, a few months before two others were spotted having sex a few meters from Palazzo Vecchio.

Misbehaving in the Renaissance city is however not only left to the Americans.

In a particularly bad year for the Ponte Vecchio – the only bridge to be spared destruction as the Nazi’s retreated from Florence in 1944 – a Turkish woman tried to write her name on its stone in nail polish.

A week earlier, the child of a German tourist drew on the bridge with felt-tip pen, prompting a fine and the order to clean up the mess.