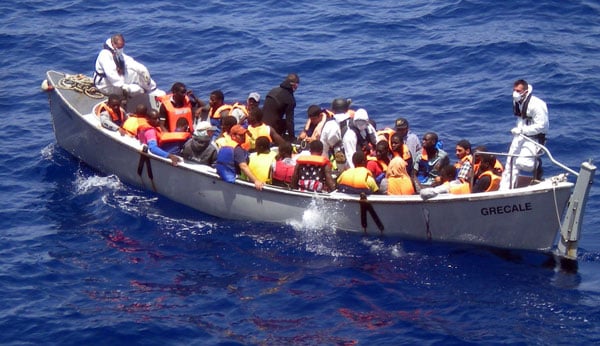 Increasing numbers of migrants are making the perilous journey across the Mediterranean. Photo: DPA

Four coastguard vessels and an Italian navy ship intervened Saturday to save three large boats carrying migrants off the Libyan coast after intercepting distress calls from satellite telephones, only to find two other boats with migrants on board in difficulty nearby.

The Italian vessels were on Sunday transferring the migrants to the island of Lampedusa and the Sicilian ports of Augusta and Porto Empedocle.

In a separate incident on Saturday, 318 migrants were brought to the Sicilian port of Pozzallo after being rescued off the coast of Libya by an Icelandic navy ship taking part in a patrol for the EU borders agency Frontex.

The number of migrants entering the EU illegally in 2014 almost tripled to 276,000, according to Frontex, nearly 220,000 of them arriving via the Mediterranean.

The chaotic situation in Libya has sparked a rise in boats setting out for Europe from its unpoliced ports carrying refugees fleeing conflict and poverty in the Middle East and Africa.