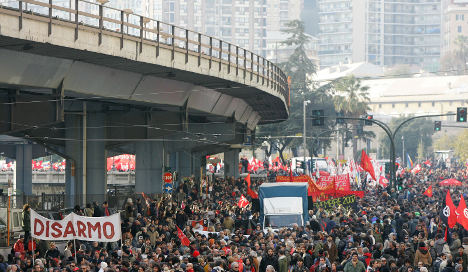 A rally in Genoa in 2007 in support of those who stood trial for suspected violence during the 2001 G8 summit in the city. Photo: Andrea Solaro/AFP

The European Court of Human Rights rapped Italy for a 2001 crackdown on demonstrators on the fringes of a G8 summit in Genoa, northern Italy, accusing police of acts of torture and ordering Rome to compensate one of the victims.

The rights court said Italy must change its laws to make torture a crime – a call taken up by campaigners and politicians, who urged greater urgency in implementing a bill which has been under examination in parliament for two years.

"Justice in Strasbourg, with Italy condemned for a brutality which in Europe can be called torture. The fact that it is not a crime in Italy is shameful, dire," said Patrizio Gonnella, head of the Antigone rights association.

Torture is not currently a crime under Italian law. The legal shortfall is blamed for the acquittal of the most serious charges against baton-wielding policemen involved in the nighttime raid on the Armando Diaz school in Genoa.

In 2012, 25 officers were found guilty of falsifying evidence concerning the raid, in which some 200 masked anti-riot police swooped down on sleeping activists, breaking bones, chasing those trying to flee and beating many senseless.

The police planted two Molotov cocktails in the building to justify the raid and repeatedly lied about what happened.

The more serious charges of grievous bodily harm and libel fell by the wayside because the statute of limitations expired, and none of the convicted served time behind bars.

"It will, however, bring Italy into line on human rights," she said, adding that it would "finally fill a gap which European judges, like all Italian citizens, consider intolerable."

The bill, which was examined by the upper house last year, is due to be discussed by the lower house this week – but will then have to return to the senate before final approval.

Giuliano Giuliani, whose son Carlo was shot dead by police on the day of the raid during demonstrations against the G8 summit, welcomed the fact the European court "recognized Italy touched bottom" with the attack on activists.

The court's ruling was based on a suit filed by Arnaldo Cestaro, who was 62 years old at the time, and was bedding down for the night in the school along with dozens of other anti-globalization protesters when the raid began.

Police officers dragged some of the protesters off to a nearby jail, where the brutality continued. Others were physically and verbally abused by police doctors. Dozens of activists and journalists were left injured in the raid.

The court said in Cestaro's case there were "acts of torture sustained by the applicant" and found "the Italian criminal legislation… was inadequate for the punishment of such acts and not an effective deterrent against their repetition."

The ruling may set a precedent for a series of other cases by victims pending before the court. Italy was ordered to pay Cestaro €45,000 ($49,000) and has three months to appeal.