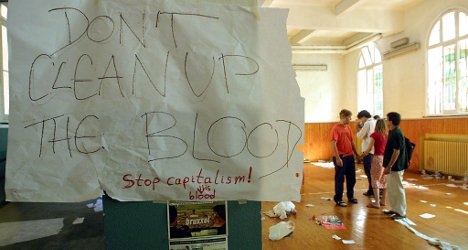 Lawmakers have now made the final amendments to the torture law, which has been going through parliament for two years, said Donatella Ferranti, president of the parliamentary Justice Commission.

“We have introduced small changes, but we’ve maintained the structure. Now I wish that the parliament unanimously approves the measure, so that the Senate can transform it into definite law by the summer,” she was quoted in La Stampa as saying.

The announcement follows a ruling by the European Court of Human Rights (ECHR) on Tuesday, in which the court said police committed “acts of torture” against a protester at the G8 summit in Genoa in 2001.

The victim was one of dozens of people attacked by police during a nighttime raid, during which protesters suffered serious injuries.

The ECHR slammed Italy for not bringing the perpetrators to justice, stating the shortfall was in part down to the country’s inadequate legislation.

Rights groups have long since campaigned for Italy to make torture a crime.

In February, Amnesty International lamented that Italy’s attempts to create a torture law had “failed again”.

The legislative gap was described by the rights organization as a “25-year breach of Italy’s obligations under the UN Convention against Torture.”