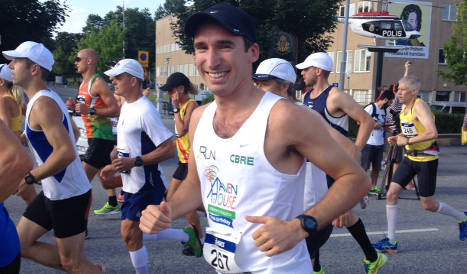 Miles Skinner will run 420km from northern Tuscany to the Vatican’s St Peter’s Square to raise money for the Monte San Martino Trust, a charity dedicated to the memory of heroic Italians during World War Two.

During the war, his grandfather was helped by Italians after being captured in north Africa and imprisoned at Sulmona in southern Italy.

After the Armistice in September 1943, he escaped from the camp he was held at and eventually succeeded in rejoining the Allies.

“All his life, he felt a debt of gratitude to the people of the Italian countryside, who risked their lives by hiding and feeding Allied prisoners such as him who were on the run from the fascists,” Skinner told The Local.

The 29-year-old, who works as a surveyor in London, will join the Vie Francigine, a historical pilgrimage route that runs from northern Europe to Rome, from the Tuscan city of Lucca on April 26th.

“Following my grandfather’s death a few years ago, my grandmother was keen for me to support the charity,” he added.

“After she passed away last year, I was determined to take up a sizeable physical challenge with a connection to Italy, so as to help, in a small way, to give something back to the Italian people.”

“I wanted to choose something as difficult as possible this time, not only to push myself to the limit but also so that I could persuade people to be generous in giving to the charity,” he said.

“I am excited and looking forward to it but also naturally a little bit nervous because of the enormity of the challenge.”

The Monte San Martino Trust awards bursaries for young Italians to study at English-language schools in London and Oxford.