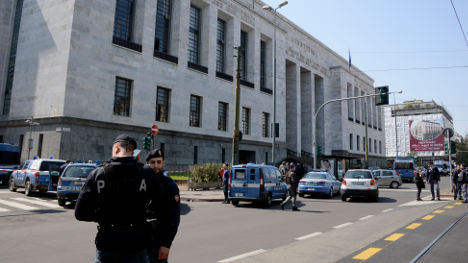 Police vehicles are parked outside Milan's court after a shooting on Thursday. Photo: Olivier Morin/AFP

"I wanted revenge against those who ruined me," Claudio Giardiello, 57, told police who arrested him after the shooting in Milan on Thursday.

The other two dead were a lawyer and one of his co-defendants.

The attack shocked the country, with politicians and the victims' families demanding to know how it was possible for an armed man to get through court security, and judges linking the killing spree to a poisonous climate against the justice system.

The killings just streets away from the shopping quarter sparked immediate concerns over a breakdown in security in the city, which from May will host the 2015 Milan expo, an international event set to draw millions of visitors.

"The Expo city has shown the world it is – at the heart of one of its nerve centres – at the mercy of whoever plans in the next few months to spread terror," editorialist Gad Lerner wrote in La Repubblica daily.

With fears of a possible attack by the Islamic State group fuelling the panic, critics warned Pope Francis's jubilee year, which will run from December 8th to November 20th 2016, was also a high-risk venture which could lure in militants.

"If blood can run even inside a court, defined as one of the most protected places, what could happen in a hospital? Or a school?" asked Michele Brambilla in La Stampa.

Judge Gherardo Colombo, one of the leading prosecutors in the Clean Hands investigations into political corruption in the 1990s, suggested "an anti-judiciary climate" may have fuelled Giardiello's decision to take the law into his own hands.

In a rare speech, President Sergio Mattarella called for more to be done to protect judges and "repel every form of disrepute towards magistrates, who are always on the front line and are particularly exposed."

The dead lawyer, 37-year old Lorenzo Alberto Claris Appiani, was appearing as a witness against Giardiello, who was described by one of his former legal advisors as "an aggressive person, a little paranoid."

"He was always convinced people were trying to cheat him," said one of his former lawyers Valerio Maraniello.

The murdered judge, Fernando Ciampi, 72, had been the one to declare Giardiello's estate agency bankrupt in 2008.

"Where does this obsession against judges, informers, witnesses come  from… if not from the anxiety of a highly criminal ruling class to free itself from legal controls in order to break the law undisturbed?" asked Marco Travaglio.

The editor of the left-wing Il Fatto Quotidiano newspaper pointed to the example set by former prime minister Silvio Berlusconi, long plagued by legal woes, who has repeatedly accused the judicial system as being out to get him.

The idea that judges are biased or politically driven feeds into a underlying belief – fuelled by endless political scandals – that the state in Italy is weak and corrupt and Italians are better off protecting their interests alone.

Paolo Bricco of the financial daily Il Sole 24 Ore said it was this distrust in the state that made Italy vulnerable.

"We need the state… so that, in this increasingly disjointed and feverish Italy, the Hobbesian prophecy of homo homini lupus, 'man is a wolf to his fellow man', does not come true."

For others, it was the widespread belief that some people are playing the corrupt system and getting rich while the foolish are not – one of the excuses made by tax evaders in Italy – that drove Giardiello's self-righteous rage.

Rather than reduce the murders to the act of a madman, Lerner said the blame lay in a country where "in difficult conditions, the fight continues against an increasingly strong organised crime network and as yet unrooted corruption."

The fault lies in the idea that "getting rich is about getting the winning numbers in the lottery, hard work is for losers. This is a social ill, rather than a mental one," he said.