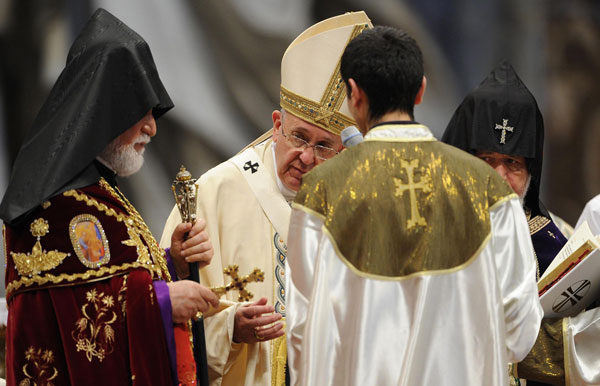 Pope Francis marked the 100th anniversary of the mass killings of Armenians on Sunday. Photo: DPA

"In the past century our human family has lived through three massive and unprecedented tragedies," he said during a solemn mass in Saint Peter's Basilica to mark the centenary of the Ottoman killings of Armenians.

"The first, which is widely considered 'the first genocide of the 20th century', struck your own Armenian people," he said, quoting a statement signed by Pope John Paul II and the Armenian patriarch in 2001.

Many historians describe the killings as the 20th century's first genocide, but Turkey hotly denies the accusation.

Using the word was not a papal first: John Paul II used it in a joint statement signed with the Armenian patriarch in 2000, which said "the Armenian genocide, which began the century, was a prologue to horrors that would follow". The statement provoked a sharp reaction from Turkey at the time.

In addition, Pope Francis is said to have used the word in at one private audience in 2013 — but even that sparked an outraged reaction from Turkey.

But it was the first time the killings have been described as such during a mass in Saint Peter's Basilica.

"We recall the centenary of that tragic event, that immense and senseless slaughter whose cruelty your forebears had to endure," Francis said.

The 78-year-old head of the Roman Catholic Church had been under pressure to use the term genocide publicly to describe the slaughter, despite the risk of alienating an important ally in the fight against radical Islam.

Armenians say up to 1.5 million of their kin were killed between 1915 and 1917 as the Ottoman Empire was falling apart, and have long sought to win international recognition of the massacres as genocide.

But Turkey rejects the claims, arguing that 300,000 to 500,000 Armenians and as many Turks died in civil strife when Armenians rose up against their Ottoman rulers and sided with invading Russian troops.

Over 20 nations, including France and Russia, recognise the killings as genocide.

In 2014, Turkey's President Recep Tayyip Erdogan, then premier, offered condolences for the mass killings for the first time, but the country still blames unrest and famine for many of the deaths.

Francis said the other two genocides of the 20th century were "perpetrated by Nazism and Stalinism", before pointing to more recent mass killings in Cambodia, Rwanda, Burundi and Bosnia.

"It seems that humanity is incapable of putting a halt to the shedding of innocent blood," he said.

The pope pointed to Armenia's particular importance as "the first Christian nation", being the first country to adopt Christianity as its state religion in 301 AD.

Those murdered a century ago were mainly Christian and although the killings were not openly driven by religious motives, the pontiff drew comparisons with modern Christian refugees fleeing Islamic militants.

He referred once again to the modern day as "a time of war, a third world war which is being fought piecemeal", and evoked the "muffled and forgotten cry" of those "decapitated, crucified, burned alive, or forced to leave their homeland."

"Today too we are experiencing a sort of genocide created by general and collective indifference," he said.