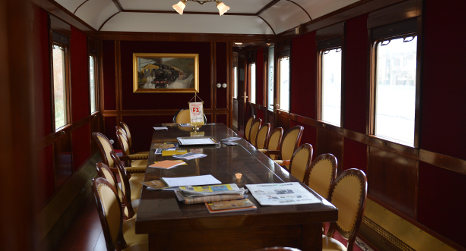 A meeting room aboard Tuscany's Nature Train, part of the "slow tourism" project with a route along the Val d’Orcia region. Tiziana Fabi/AFP

Officials said the objective is the development of a form of "slow tourism", inspired by the slow food movement, that seeks to promote the different facets of a regional heritage including history, geography and industry.

"It is a sustainable tourism model that is particularly important in Italy because Italy offers the world excellence in culture and arts as well as in food, fashion, shopping, scenery," said Culture and Tourism Minister Dario Franceschini.

Opening in time for the tourist season, the routes lasting from 20 minutes to three hours are aboard vintage railway cars from the 1920s pulled by steam engines.

Appreciating "the beauty of the scenery aboard historic trains, that is a new sector in which Italy is investing a lot," said Franceschini, who enjoyed a weekend ride along the line that runs through the verdant hills of the Val d'Orcia in Tuscany.

One of the other lines hugs the mountains that surround Lake Iseo northeast of Milan, another runs through the mountains of the central Abruzzo region and the final one by the city of Agrigento on Sicily's southern coast.