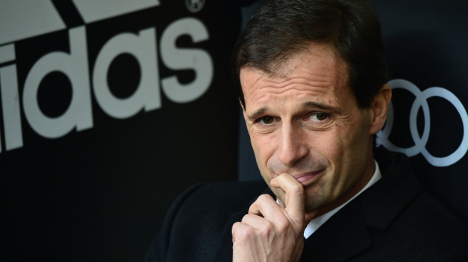 Preparations for what is the Italian champions' most crucial fixture of the season have been far from perfect.

At the Enrico Tardini stadium on Saturday a Juventus side missing Gianluigi Buffon and Carlos Tevez among others failed to convert several scoring chances before conceding a 1-0 defeat to a club that entered administration last month after being declared bankrupt.

Although Juve's title hopes have not been affected – they now lead Lazio by 12 points with eight games remaining – Allegri is confident a different Juventus will emerge on Tuesday when they will be under pressure to seal a first leg victory before the return leg in the Principality.

"I hope this setback serves us well, although I'm sure that we will see an altogether different Juventus on Tuesday," Allegri said after Saturday's defeat.

"We're not used to losing. We were a little listless, we lacked bite and aggression. But now we have to put this display behind us. It would be stupid to let a defeat like this get in the way of our Champions League dream."

The defeat to Parma, who have entered administration and failed to pay their players all season, was Juve's second reverse of the league season although Juve seemed out of sorts in the absence of Buffon, Tevez and defender Andrea Barzagli.

Buffon, who had an infection, and Tevez, who spent his rare day off at Lake Maggiore, will return to Allegri's starting line-up for Tuesday as Juve look to take a first step towards securing their first semi-final appearance since 2003 when they beat Barcelona over two legs in the quarters.

While influential Frenchman Paul Pogba is still sidelined with injury, midfield maestro Andrea Pirlo should start on the bench having recently recovered from injury, leaving Claudio Marchisio with the job of orchestrating play towards lively Uruguayan front man Roberto Pereyra, likely to play in the 'hole' behind Alvaro Morata and Tevez.

Doubts remain over Barzagli, who is nursing a sore calf. Indeed his availability could determine whether Allegri deploys the 3-5-2 formation he has used sparingly this season or the 4-3-1-2 that saw Juve swipe Borussia Dortmund aside 5-1 on aggregate in their last 16 tie.

Either way, Juventus have been impervious at home in both Serie A and Europe this season and have never lost at home against French opposition. In last season's Europa League quarter-finals they defeated Lyon 2-1 in Turin to complete a 3-1 aggregate success.

Monaco will be without captain Jeremy Toulalan after the defender limped off injured in a 3-0 win over Caen on Friday, a result which nonetheless was crucial to Monaco's confidence before they make the short trip across the Franco-Italian border.

Monaco are targeting their first semi-final appearance since the 2003-2004 season when they went all the way to the final before being humbled by FC Porto.

Coach Leonardo Jardim said: "I think the team played very well and now looking ahead to Tuesday the best thing was for the team was to win, which gives us confidence and the desire in regards to our away performances."