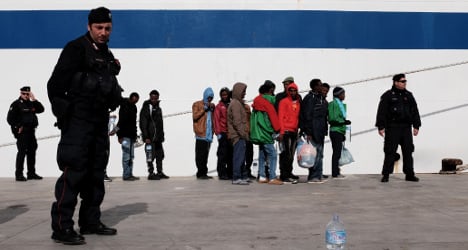 Migrants wait at the port of Lampedusa in February 2015. Photo: Alberto Pizzoli/AFP

A surge in attempted illegal crossings from the coast of north Africa saw nearly 8,500 migrants rescued between Friday and Monday, reigniting a debate in Italy over whether or not the country has a duty to house all new arrivals.

Prime Minister Matteo Renzi is "looking for another 6,500 beds for immigrants," said Matteo Salvini, head of the anti-immigrant Northern League, which has made the crisis one of its platforms ahead of regional elections in May.

"I ask the League's governors, mayors, assessors and councillors to say no, with every means, to every new arrival. The League is ready to occupy every hotel, hostel, school or barracks intended for the alleged refugees," Salvini said on Facebook on Tuesday.

The interior ministry had on Monday called on Piedmont, Lombardy, the Veneto, Tuscany, Emilia-Romagna and Campania regions to find 700 places each for the latest arrivals.

Puglia in southern Italy was told to find 300 places, while the Lazio and Marche regions were asked for another 250 each, with the remaining 1,500 beds to be divided between other regions.

Members of the opposition have accused Renzi's centre-left government of pandering to those fleeing war zones or poverty, with many saying the policy of rescuing immigrants at sea encourages others to attempt the journey.

"It is an absolute disgrace that the government, instead of repelling the invasion of clandestine immigrants, thinks to appropriate thousands and thousands of beds, giving in to the invasion," said senator Maurizio Gasparri from the centre-right Forza Italia party.

Boats 'should be sunk'

And with summer approaching and over 500,000 people waiting to set out from Libya for Europe according to EU border agency Frontex, charity organizations are warning the government is not prepared to deal with the next wave.

Some 10,500 people have been plucked from boats since the beginning of April, with 20,500 people arriving in total so far this year. According to the International Organization for Migration (IOM), 500 people have died at sea.

Italy's coast guard said that 2,851 people had been picked up from boats on Monday alone.

Forza Italia head Giorgia Meloni said the boats setting off from north Africa to Italy "should be stopped as they leave," while those used by smugglers to escape "should be sunk".

The majority of immigrant arrivals have no desire to stay in Italy and quickly journey on towards northern Europe.

According to the UN's refugee agency, in 2014 the number of people fleeing conflicts in Syria and Iraq who applied for asylum in wealthy countries was the highest in 22 years.

While Germany received the most applications, with 173,000 requests, Italy ranked behind the United States, Turkey and Sweden with 63,660 requests.

The country has a publicly-funded network of reception centres housing some 30,000 people, according to the Migrantes Foundation.

But due to severe overcrowding the extra beds are likely to be found in converted hotels, hostels, old people's homes and holiday residences which apply to take part in a state-funded hospitality scheme.

The government gives hundreds of structures across Italy €30 a day per migrant, with €2.50 going towards pocket money and the rest earmarked for bed, board and services such as legal assistance with applying for asylum.

Critics have said this hospitality business, which at the end of 2014 housed over 32,300 migrants according to the interior ministry, is worth around €1 million a day and attracts profiteers and organized crime.

Catholic associations like Caritas are putting roofs over the heads of another 20,000 immigrants, Migrantes Foundation director Giancarlo Perego said, adding that the government's preparations were "absolutely insufficient."

"It's not tolerable for a municipality to be able to decide whether or not to take in an asylum seeker. It would be like deciding whether or not to support an old person who is not self-sufficient or an unaccompanied minor," he said.