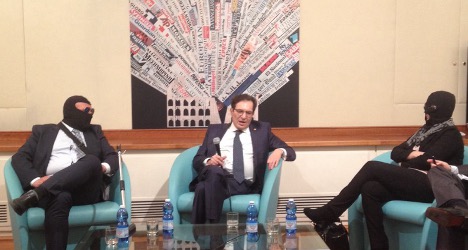 Witness Giuseppe Carini, from Sicily, was speaking in Rome in the wake of a new reinsertion scheme that started last week.

“To see our region showing us that it isn’t going to let us down is a real statement for those who testified against the mafia. It becomes an acknowledgement of our sacrifices for the sake of loyalty to our democratic institutions," he said, wearing a balaclava and sunglasses for security reasons.

Carini was speaking alongside Piera Aiella, another witness, and Rosario Crocetta, the president of Sicily.

The new scheme will see the 48 witnesses who gave evidence against criminal organizations in Sicily placed into administrative jobs at a regional level, both on the Italian island and elsewhere.

Last week, Crocetta signed the first 13 work contracts in Palazzo d’Orléans in Palermo, and another 35 are expected to be signed on May 23rd, on the anniversary of the 1992 murder of anti-mafia prosecutor Giovanni Falcone.

“A lot of these witnesses are business owners,” Crocetta said. “Our problem today is to not make them go bankrupt, because in a corrupt country, people won’t buy from an entrepreneur who spoke out. In some cases, people won’t even give jobs to someone who spoke out.”

Most witnesses in cases of organized crime are entrepreneurs who refuse to pay protection money ("pizzo"). According to the Italian parliament's anti-mafia commission, the phenomenon involves over 160,000 companies nationwide and amounts to €10 billion a year in revenues.

Crocetta called for the creation of a “white list” of companies who have collaborated with the authorities to be provided with protection and financial support after testifying.

Sicily's president said that the jobs will be given “according to skills and experience,” and that the region will work closely with Italy’s interior ministry to ensure the highest level of privacy to those affected.

The placement of the 48 witnesses who have collaborated with the authorities in Sicily since 1991 is expected to cost the region around €750,000 a year.

The work reinsertion scheme is part of a wider attempt to give witnesses in mafia cases more support and differentiate them from collaborators – or “pentiti” – the ex-mafiosi who decided to come clean and work with the authorities in order to see their prison sentences reduced and be offered protection.