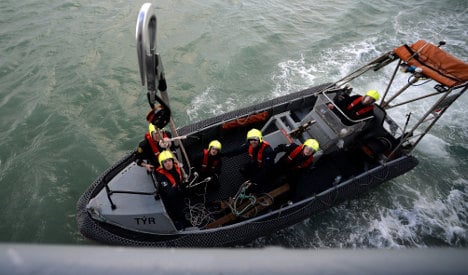 The incident happened on Monday when an Icelandic coastguard vessel Tyr was rescuing 250 people from a wooden boat some 60 nautical miles off Libya.

As the operation was winding up a speedboat approached carrying smugglers who fired several shots in the air before fleeing, taking the wooden boat the migrants had been in with them.

"This is a sign that smugglers in Libya are running short of boats and are more willing to use weapons to recover those used to transport the migrants," said Fabrice Leggeri, Frontex executive director.

It was the second such episode this year. In February, the Italian coastguard was confronted by armed traffickers who ordered the migrant boat be handed over once the rescue operation was complete.

The boats are usually impounded by Italian or EU authorities as part of their investigations into trafficking rings, which are known to collect passengers for huge fees in strife-torn Libya and pack them into unseaworthy vessels for Europe.

Up to 400 migrants trying to reach Europe died after their boat capsized off the Libyan coast on Sunday, said survivors who were saved and brought to Italy.

The Italian coastguard on Monday said they had managed to rescue 144 of the people on the sunken vessel, while nine bodies were also recovered.

READ MORE: Up to 400 migrants die as boat capsizes

Frontex vessels assisted the Italian authorities in picking up between Friday and Monday around 8,500 boat migrants from the Horn of Africa, Sub Sahara and West Africa.