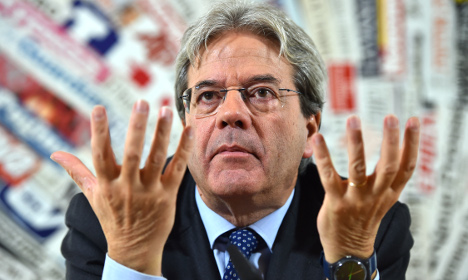 In the aftermath of the latest migrant tragedy that saw some 400 people drown on Sunday off Libya, Foreign Minister Paolo Gentiloni said Italy was shouldering nearly all of the burden for patrol and rescue.

"Ninety percent of the cost of the patrol and sea rescue operations are falling on our shoulders, and we have not had an adequate response from the EU," he told the Italian daily Corriere della Sera, adding that the EU was only spending three million euros a month on its Operation Triton sea patrols.

"And then there is the difficult issue of knowing where to send those rescued at sea – to the nearest port? To the country where their boat came from? The EU has to respond clearly to these questions," Gentiloni said.

Survivors told charity workers in Italy that the overcrowded vessel overturned with when refugees on board surged to see their rescuers approach.

Amnesty International said much of the responsibility for the crisis rested with Brussels.

"In demanding an end to the Mare Nostrum rescue operation that saved 170,000 lives, and replacing it will a surveillance mission, Triton, the EU has turned its back on its responsibilities and clearly threatens thousands of lives," said Jean-François Dubost, Amnesty's displaced persons director in Paris.

Gentiloni said that in order to stem the tide, the EU also had to tackle why the migrants were trying to make the perilous journey to Europe.

He said it needed to "work on the regions of origin" of the wave of refugees, including "Syria, the Horn of Africa and central Africa".

Italy believes the only way the flow can be slowed is to tackle the chaos caused by the civil war in Libya, from whose unpoliced ports most of the migrant boats are coming.

Gentiloni called for a more inclusive Libyan government, something which the United Nations also wants.

"We don't have months and months (to sort this out)," he warned. "The double risk of an advance of the Islamic State group in Libya and the waves of migrants means we are in a race against the clock."

In the face of these threats, Gentiloni raised the possibility of more drastic international action including "targeted anti-terrorist strikes, for example, to help the anti-Isis coalition, and action against human trafficking and more collaboration (with African and Middle Eastern) countries so that refugees can be welcomed in neighbouring countries."