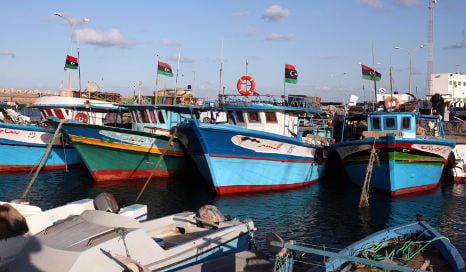 The boat was reportedly seized and taken towards the Libyan port of Misrata. Photo: Mahmud Turkia/AFP

The navy said in a statement, seen by The Local, that maritime security staff working in the area had responded to reports that the boat had been seized, although no further details were given.

The fishing boat, called Airone, was seized in the early hours of Friday about 90km off the Libyan coast, the navy said.

Seven fishermen, three from Sicily and four from Tunisia, were on board.

Initial reports said "several Libyan soldiers" boarded the vessel, although Francesco Mezzapelle, a spokesman for the Sicilian fishing association, told the Associated Press it was most likely "an act of piracy".

He added that the armed men did not appear to be from Libya's forces but that their loyalties were unclear.

After being seized, the boat was reportedly taken towards the Libyan port of Misrata.

The chaos in Libya has seen thousands of migrants flee to Italy and also sparked fears of a new stronghold for jihadists to launch attacks on Europe.

Up to 400 people died trying to make the crossing on Sunday after their boat capsized off Libya’s coast.