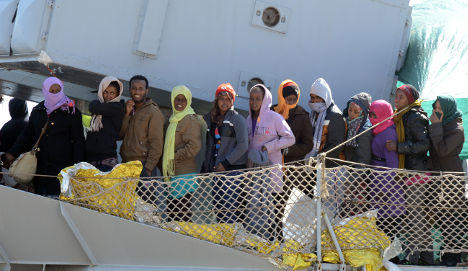 A boat transporting migrants arrives in the port of Messina after a rescue operation at sea on April 18th. Photo: Giovanni Isolino/AFP

The foreign ministers were originally due to meet on their own but the agenda had to be changed after the loss of a ship carrying more than 700 people sparked calls for immediate action, a European Council spokeswoman said.

The foreign and interior ministers will meet at 1pm GMT, the spokeswoman said, with EU Home Affairs Commissioner Dimitris Avramopoulos also attending as the 28 member states try to find a solution to the growing tide of humanity washing up on its southern shores.

The foreign ministers had been due to discuss the situation in war-torn Libya, now a major transit point for people from all over Africa and the Middle East trying to get to Europe.

Exploited by ruthless people smugglers, thousands take to the sea in rickety boats at the mercy of the elements and prone to capsize.

Italy, which has borne the brunt of the latest exodus, said only 28 people survived the latest shipwreck off Libya.

"It seems we are looking at the worst massacre ever seen in the Mediterranean," said Carlotta Sami, spokeswoman for the UN refugee agency UNHCR.

Spanish Prime Minister Mariano Rajoy said Europe risked "damaging our credibility if we are not able to prevent these tragic situations which are happening every day."

As well as Monday's meeting, EU president Donald Tusk was considering holding a special summit on the crisis but no date has been fixed.

The latest disaster comes after a week in which two other migrant shipwrecks left an estimated 450 people dead.

Some 11,000 migrants have been rescued since the middle of last week and current trends suggest last year's total of 170,000 landing in Italy is likely to be exceeded in 2015.

The issue of who handles the migrants – for asylum or repatriation – is hugely sensitive, with Italy complaining its EU partners are not doing enough.

It scaled back its Mare Nostrum search-and-rescue operation at the end of last year in protest at the rising cost and it was replaced by a smaller EU-led mission called Triton.