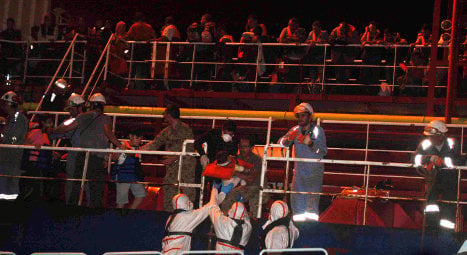 The comments came as EU ministers headed Monday into crisis talks to discuss what may be the Mediterranean's deadliest migrant disaster to date.

Italy's coastguard said only 28 people had survived when the vessel smuggling people to Europe sank off war-torn Libya on Sunday.

"Get Mare Nostrum back out there, give it the support it needs to save these lives," Swing told AFP in an interview on the sidelines of a conference in the Indonesian capital Jakarta.

He said that Triton, a much smaller EU-run operation that replaced the Italian one, was "not adequate".

"They dont have a mandate, they're a border protection agency, not a life-saving agency," he said, adding Triton was not patrolling in the deep waters of the Mediterranean and did not have sufficient equipment.

Italy scaled back Mare Nostrum after failing to persuade its European partners to help meet its operating costs of €9 million ($9.7 million) a month amid divisions over whether the mission was unintentionally migrants to attempt the crossing.

However, Swing dismissed the claims and urged European countries to support the programme.

"There are 27 other members of the European Union, surely we can share responsibility for this and it would not cost anybody too much," he said.

The latest disaster comes after a week in which two other migrant shipwrecks left an estimated 450 people dead, with increasing boatloads coming from Libya as the North African country falls deeper into chaos.